Street Soccer, it's going down in the streets! 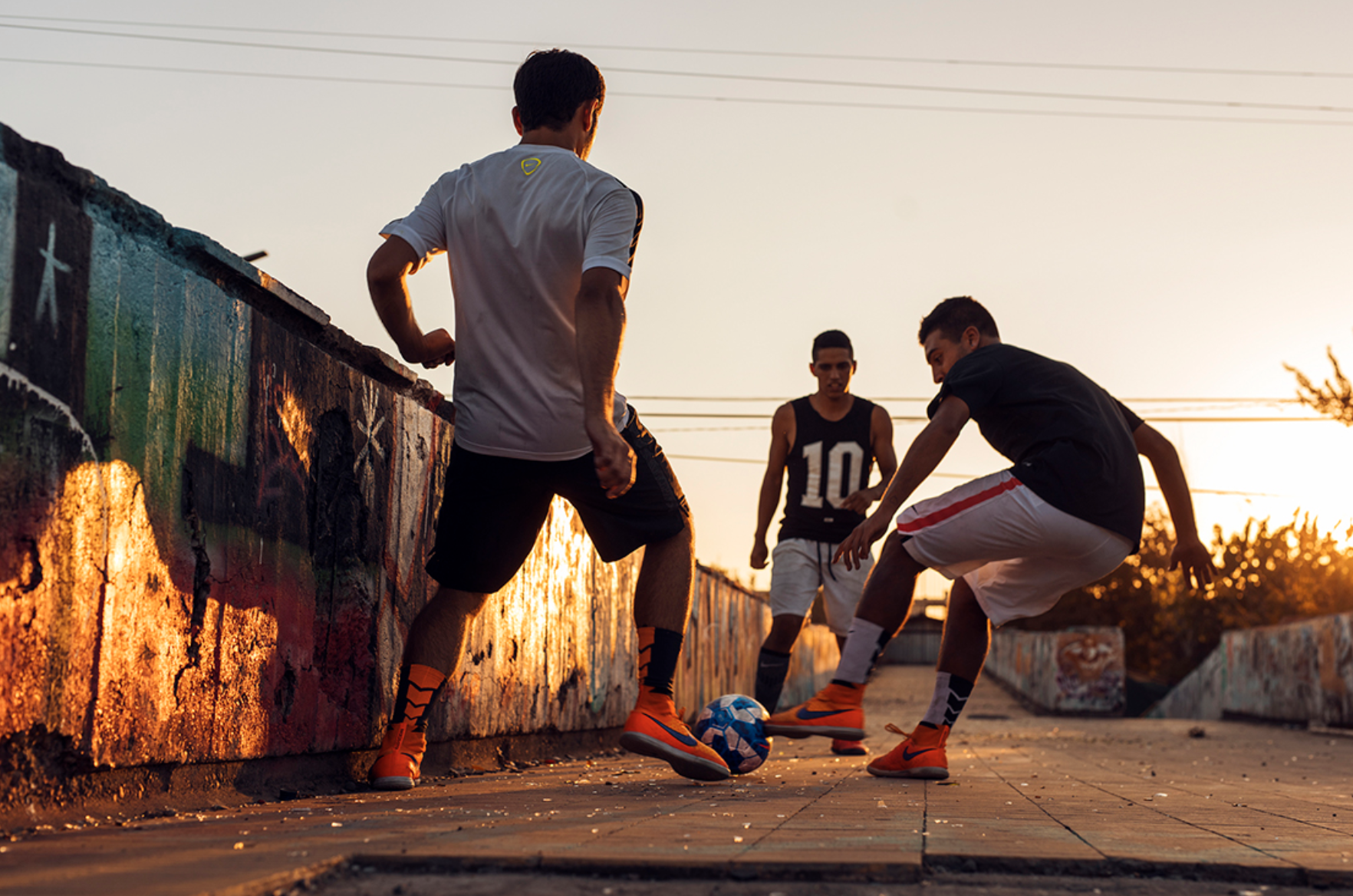 Let me guess your game is more designed for street soccer. Oh and let me just take a shot in the dark at one more thing, your mother has no working lamps in the house anymore thanks to you. Some of the best players in the world grew up in less than ideal environments so playing on the street was their only option and look at them now. Don't underestimate what playing soccer on the street can teach you and help you to improve your game. Street soccer will always have a place in the sport as it can be played any place at any time and a part of all of our childhoods. Between your fancy team training and games look to kick a ball around in the streets with your pals for that nostalgic flashback.

Learn all about street soccer, freestyle soccer, panna, megs and so much more as you read further but don't spend too much time reading, after all street soccer is to be played not only read about. The true beauty behind this game is no matter if it's futsal, beach, outdoor, indoor or street soccer all of us love to play it in so many different forms and conditions. So what are you waiting for? Grab a ball, some friends and keep those legs closed!!

What is Street Soccer exactly?

Well if the name didn't give it away enough it's generally a 5v5 (but can be more or less) version of soccer played outside on the road in an alley, street corner or wherever else you can set up a couple of makeshift goals. Two goals, two teams and ball on a street, easy enough to understand? What you may not know is that street soccer has recently gained huge popularity and has developed into huge regional, national and worldwide tournaments. But street soccer is much more than just games it's also freestylers doing amazing tricks and megging players in a 1v1 arena.

1. First Touch - Balls are coming at you from all angles with all types of spin on them, your ability to collect the balls in a controlled manner is half the battle when playing street soccer. Whether it's the top, side or bottom of your foot or any other body part for that matter getting tight control of the ball sets your next decision up for success.

2. Strong on the Ball - Holding players off while maintaining possession is so important when playing in such small spaces. Strong in the legs, back and even arms will turn you from a good street player to a seasoned vet in no time.

3. Dribbling - No secret here, whether it's futsal, indoor, outdoor, beach or street being able to take players on and create a bit of magic before getting to goal will always reign supreme. Every great street soccer player can dribble and manipulate the ball to set up a teammate or score one for themselves.

There are certain attributes about street soccer that happen a lot more often then in a full field game that help you get more repetitions and train your body and mind positively, such as:

1) Speed of Play - One of the most important things a player needs to learn as they develop is increasing their speed of play (how fast they process and execute decisions). There are few better ways to do that then have lots of players in a small area and that's exactly what the environment of street soccer provides. The restricted time and space you have on the street will benefit your game in the short and long term.

2) Ball Mastery - Touches, touches and more touches. Street soccer is great for developing your overall comfort on the ball and overall ball mastery. In just an hour of playing street soccer you will learn to pass, control and receive a ball with 10 different surfaces on your body. So don't just think of it as a friendly game any more you are enhancing your technical ability as you continue to learn different ways to manipulate the ball.

3) Shielding - Believe or not a skill that goes untaught is the skill of shielding the ball from your opponents. In street soccer you will be continually shielding it from going out of bound and holding off opponents. Remember that a great shielder of the ball not only uses their legs with a wide base but also their arms and hands as protection. Playing street soccer you'll find things don't always go your way and you will need to effectively shield the ball to keep possession when you're out of options.

4) 1v1 Dribbling - Everyone loves dribbling and street soccer will get those reps up for sure. So having one good move to the right and one to the left you can try and perfect during street soccer games will pay big dividends. If you have a chance to take someone on 1v1 with just the keeper to beat in a non threatening area then do it! Many 1v1 dribbles in street soccer (because of the length of the field) will be done with rolls, step overs and quick touches not so much the long touch past your man like in an outdoor game.

what is panna and how do you do it?

Panna is 1v1 for 3 minutes and most goals wins, but the first meg (putting it through the opponents legs) wins the entire game no matter the score! If you've never tried it you're going to love it, unless you get megged in the first 5 seconds of course. The video below will explain it better than anyone can.

It can if you let it, just because of the nature of it, there are opportunities for you to perform certain things and develop certain habits that would be counter productive for the way the game is played 11v11, for example:

1) Taking Too Many Touches - Yes I know we all love the way the ball feels at our feet on the streets but we have to be careful not to develop the habit of 3 touches when 2 will do and so on. The amount of ball control and touches you get playing street soccer is great but we can't forget about the importance of having a high speed of play and sharing the ball.

2) Dribbling Unnecessarily - Another bad habit we can't fall into is dribbling all over the field every single play. When you get to outdoor soccer this habit will be hard to shake so remember to balance dribbling at the right times and playing quickly and as a team.

3) Overusing the Sole of Your Foot - It's common when playing street soccer to use the bottom of your foot for lots of skills such as controlling the ball, escaping pressure with a side or back roll of the ball or even taking players on with drags. So as good as it is to develop skill in all parts of your foot be sure to spread the love around so when you go to outdoor you're not just using the sole.

All of these choices of what to do on the street are within your control and take a conscious decision to change. By focusing on doing the right things all the time can increase your development on the field.

Are the Rules the Same as Regular Soccer?

Well since you make up the rules I guess you can decide. But the answer is yes, same rules apply. Out of bounds, fouls, generally 5v5 but can be more or less. Just no throw ins from the side, just play the ball in like a free kick. Everything else same rules apply. One thing that differs is street soccer isn't only played on an asphalt street. It's played on dirt, bricks, concrete and whatever else touches this earth so the surface changes but the rules don't, ever wonder why some Brazilians have an amazing touch? It's because they have got used to playing on the worst of surfaces so when they get on the nice perfectly cut grass they can produce magic.

Speaking of unique pitches from around the world check out this article and beautiful pictures of the best surfaces to play soccer around world from Rio to LA. Top 10 Coolest Cities to Play Street Soccer. 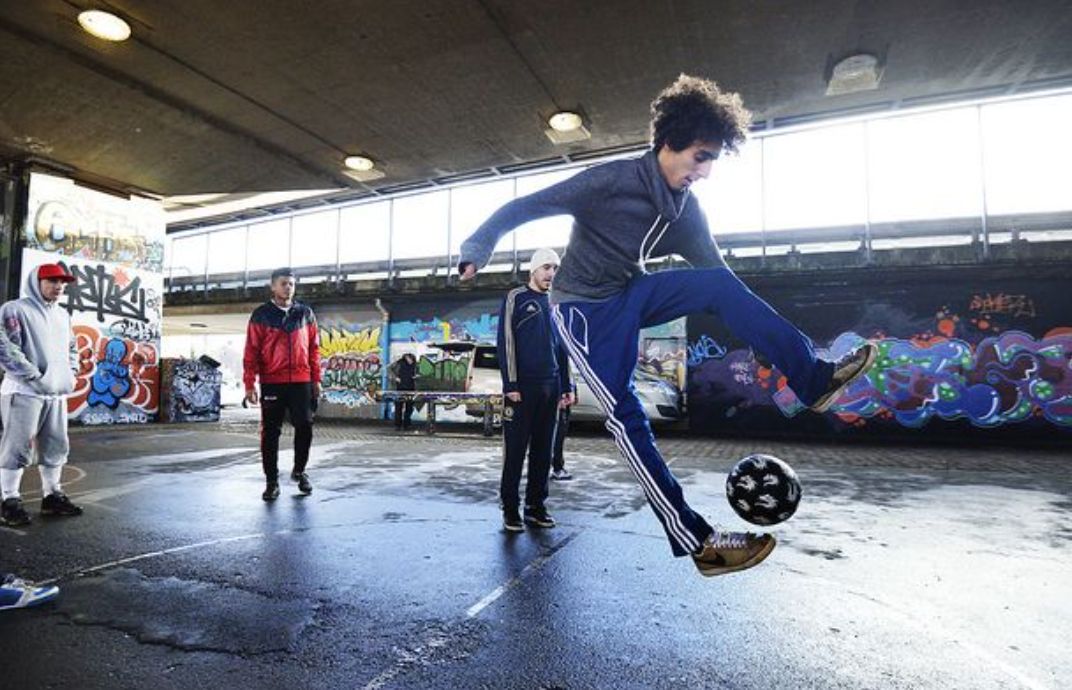 What Kind of Shoes Do I Wear?

NOT CLEATS! Anything with rubber soles or even running shoes will do. Of course your regular indoor soccer shoes will do but pretty much anything with a gum sole such as court shoes of any sort along with a decent flexibility to them should do the trick. Stay away from wearing turf shoes if you can on street surfaces such as asphalt. Obviously you're not going to wear cleats (just making sure!).

Which Countries is Street Soccer Most Popular?

It's played all over the world in every street ally and open parking lot. From the streets of Sao Palo to Melbourne to London to New York you can find street soccer being played anywhere football is loved, which is almost everywhere (damn Antarctica!) It's played everywhere in the world and can be played with anything in your bare feet and having goals made of shoes, rocks or whatever else you can find. South America, Europe, North America or Asia it doesn't matter street soccer is played everywhere and it's a beautiful thing. The beauty of it is all you need is a ball. You can make nets from rocks, bags, sticks and whatever else you can find.

Have Pro Soccer Players Played Street Soccer Before They Made it Big?

Absolutely! Almost every pro you see on TV in the EPL or La Liga and so on have fallen in love with the sport like the rest of us, on the street with some pals. Brazilians and other South Americans are renowned for growing up playing barefoot in their local neighbourhoods. Just because some players go on to play professionally does not mean they don't love the game like everybody else, in fact its quite the opposite. So if you're in the position where all you are doing is playing on the streets then no problem, just be sure to play the game the right way and try and get better every time.

If you don't have good feet look away now this could be painful, I'd love to lie and say street football is for everybody but its not. If you don't have sparks flying out of your boots then you'll get eaten up and walk home with just a story. A sad, sad story.

The world’s games in your own backyard, your neighbours are the crowd and you've got nothing but time. No refs, no screaming coaches and no pressure, just you your friends some laughs and the game you love, doesn't get better than that does it?