Soccer Position Numbers Couldn't Be More Confusing! What The Heck Is A 7, 9 & 11?

Why are soccer position numbers so confusing and why do we need them exactly?

"Hey Chris go play the 6 and tell Mike to play the 7, Johnny you're the 9 what are you doing so far back??" Ever heard something like this on the pitch from your own coach or the opponents coach?

Well now you can pretend like you know what the hell they're saying. Numbers have been associated with soccer positions for decades but most people (even soccer players) don't know which is which and what they mean.

The reason they exist is to help with the overall organization of the teams structure as well as making the communication of a position significantly more efficient.

Most people know the classic #9 which is the top striker, these are the Suarez, Lewandowski and Sergio Agueros of the world, but other than that what else do you know? Maybe #1 the Goalkeeper?

If you're ever hoping to play at the University or Pro level and understand tactics at a higher level you are going to need to know all 11 positions by name and number with your eyes closed.

Quick! What position is the #7 or #3? If you had to take awhile to think about it or have no clue then this page is perfect for you. After you're done test yourself by watching a game on TV and start pointing out all the different positions by number, once you've got that think about all the positions you've played and see if you can name them as well.

When people talk about having a tight tactical IQ the basics begin with knowing what your position does in the different phases of the game and knowing you all the soccer position numbers is essential.

What Are Each Of The Soccer Position Numbers For Every Position? Give It To Me Straight

#1 - Goalkeeper - Most starting keepers will wear this jersey number but not always. This one is the furthest one back and should be by far the easiest to remember.

#2 - Right Fullback - After the keeper (#1) if you go to your right across the back line you'll easily find the next number in numerical order #2. Think of your favourite right back if you're having trouble remembering it.

#3 - Left Fullback - When you turn 35 you'll know how to play left back and center back, now that we've got that memorized onto the next one.

#4 - Right Center Back - If only it went in numerical order from left to right across the back it would be much easier to remember, well now that you know it doesn't that should help you remember it.

#5 - Left Center Back - The most difficult position to find is a quality left footed left center back, I got nothing, good luck remembering this one.

#6 - Center Midfielder (Defensive) - This center midfielders job is to stay at home and establish the most defensive presence out of all the center mids, the six sits in front of the center backs, six and sits should help you remember that, now say it ten times fast!

#7 - Right Winger - SUIIIIII, common Ronaldo this one should be easy to remember right? Think about him blazing down the right wing taking players on.

#8 - Center Midfielder (Box to Box) - This is your end to end center mid and they run figure eights around the pitch going box to box, figure 8 should help you remember who they are and what they do.

#9 - Striker - Suarez anyone? SS Striker Suarez, lots of S's should help that stick in your smart sophisticated psyche!!

#10 - Center Midfielder (Playmaker) - Well look at you Mr. Playmaker, this is the most famous number in soccer history and throughout time it has been an honour to wear such a number. All the greatest players from Messi to Zidane to Maradona have all wore it and it is typically worn by the best most creative player on the team.

For a closer look at the roles of each position read over this article, Soccer Positions Explained: Names, Numbers and What They do.

Soccer Position Numbers In A 4-4-2 Formation 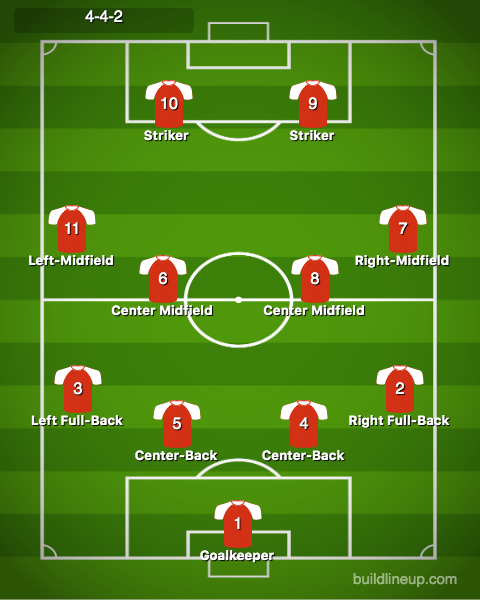 Soccer Position Numbers In A 4-3-3 Formation 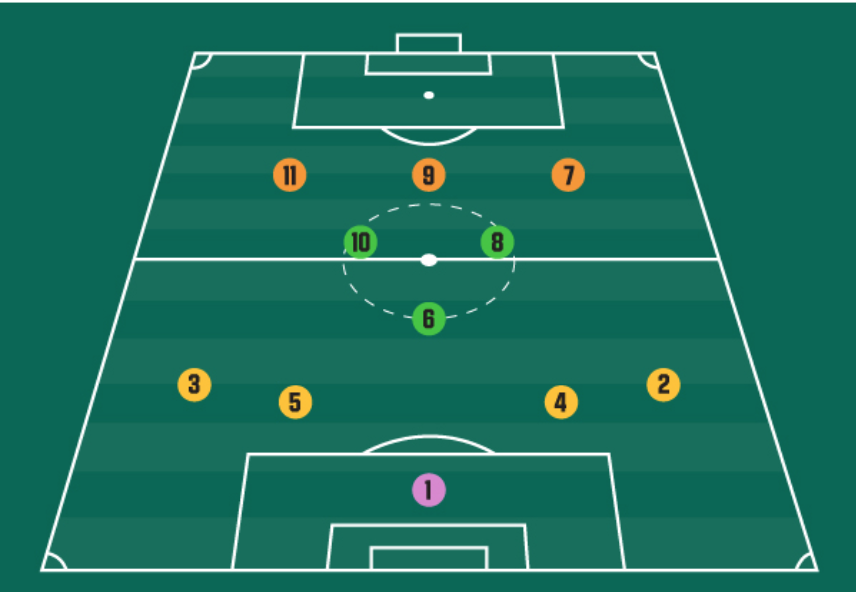 Soccer Position Numbers In A 3-4-3 Formation 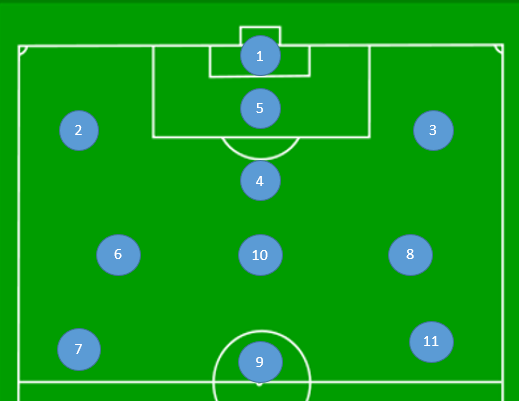 Does Your Jersey Number Need To Match The Position You're Playing?

It doesn't have to no, nowhere in the rules does it say that the number on your jersey must be the position you play or anything to that effect. It is typical though for starting players on a team have numbers between 1 and 11 or even 1 to 15.

Although it is not mandatory some teams and coaches are old school and have their starting line up or their potential starting players where the jersey number of the position they are playing where other coaches let you choose whatever number you desire.

To answer the question simply, the answer is NO, but it does happen and some players also like to keep it old school or wear the jersey number of their favourite player who used to play their position who coincidentally may have work the same jersey as their position on the pitch.

Why Do We Need To Assign Soccer Position Numbers To Each Position?

Well, believe it or not there are a few logical reasons. Firstly when showing the entire line up on a screen or tactics board it is much easier to assign a number to a position than writing out the entire name of the position.

When explaining different tactical movements, situations and adjustments it is easier to talk about a certain number moving in a direction than saying "center back goes here" or "left full back moves forward" instead you say "the 7 goes forward."

Also if a team is doing it completely by the book then the numbers on the back of each player is the number of their position so it is easier to identify a player and just by saying their number you know it is their jersey number and where they play on the pitch. Basically it gives a more uniform identification process and it is more efficient to communicate with.

Do The Soccer Position Numbers Change Based On Different Formations?

The numbers don't but the positioning of them may, what the... So a number 7 (right winger) may move from winger up 10 yards to right forward but their positional number will remain the same.

Now if you move from right winger to left full back then yes you will go from being a 7 to being a 3.

So the answer is yes you can change positional numbers on the pitch but if you roughly stay in the same area from your first position but play in a more advanced role.

For example you can keep the positional number (7 in the example above) although your position has been altered.

Is There An Easy Way To Remember All The Soccer Position Numbers?

Yes actually, I'm not going to break out to some song and dance that rhymes or can be played on the guitar but there is a way to help you remember each of the numbers and where they fit. The simple way is to break it down line by line and read it like you would a book from left to right.

For example the defensive line from left to right is 3, 5, 4, 2, I know it would be so much easier if it was in sequential order but hey what in life is good and easy?

If you're still having trouble remembering try pairing two numbers on a certain side into a memorable past event. For example my first concert ever was a band called 311. On the left side of the field the left back is 3 and the left winger is 11 so that's one I'll never forget, you can try that for yourself with other combinations of positions and numbers.

Do Soccer Position Numbers Change If You Come In Off The Bench And Replace Someone?

Obviously there are more jersey numbers than positional numbers so if you replace the striker for example off of the bench the tactical position of number 9 stays no matter who comes on and no matter which number they have on the back of their jersey.

Sometimes you wish they just used letters so it wouldn't be so confusing. So whether you start or come off the bench the position you go on for always remains the same.

Be ready to switch positions if the coach needs you to, and if they start using the positions numbers then you'll be glad you read this page, if you didn't read it all just pretend like you can't hear them.

Do Certain Soccer Position Numbers Not Have Numbers Assigned To Them Like Stopper, Sweeper, False 9 Or Attacking Center Midfield?

Every position has a number assigned to them that is 1 through 11. No matter the name of the position (especially less common ones) whether it is stopper, sweeper or anything else the numbers 1 through 11 are still used, just slightly moved.

For example a stopper which is a defensive central midfielder will still take on the number 6 and a sweeper will either be the 4 or the 5 which is one of the center backs just dropped back slightly.

1. Communication Tool - Remember that knowing the positional numbers isn't just so can pretend you're smart but so you can communicate to your teammates and coaches valuable in game information. Use it to instruct players where to play or to clarify with your coach if you are playing where you should be. Start to use the terminology that is used at the highest level so when you get there you are well read.

2. Know Your Stuff - Before talking all 7, 9, 2, 4 be sure you know all the positions and their associated numbers before you start using them. There's nothing worse than saying the wrong number to lose credibility in an instant. Like stated above create different meaningful connections to each line or pairs of positions so you never forget which number goes where.

3. Talk Like A Coach - Start using the lingo that a high level coach would use such as the position numbering to raise your credibility amongst your teammates. A great leader not only knows their own person role for their position but that of their teammates and even opponents. Before or after training be sure to chat up your coach and ask them about any position numbering you may not be entirely familiar with.

3. Making Up Your Own - Just because jersey numbers are different or your team doesn't get it that doesn't mean you can start interchanging position numbers. These numbers have been used since decades ago so don't modify them but stick with the standard numbers we all know and love.