can't score on an indirect free kick? what a shame 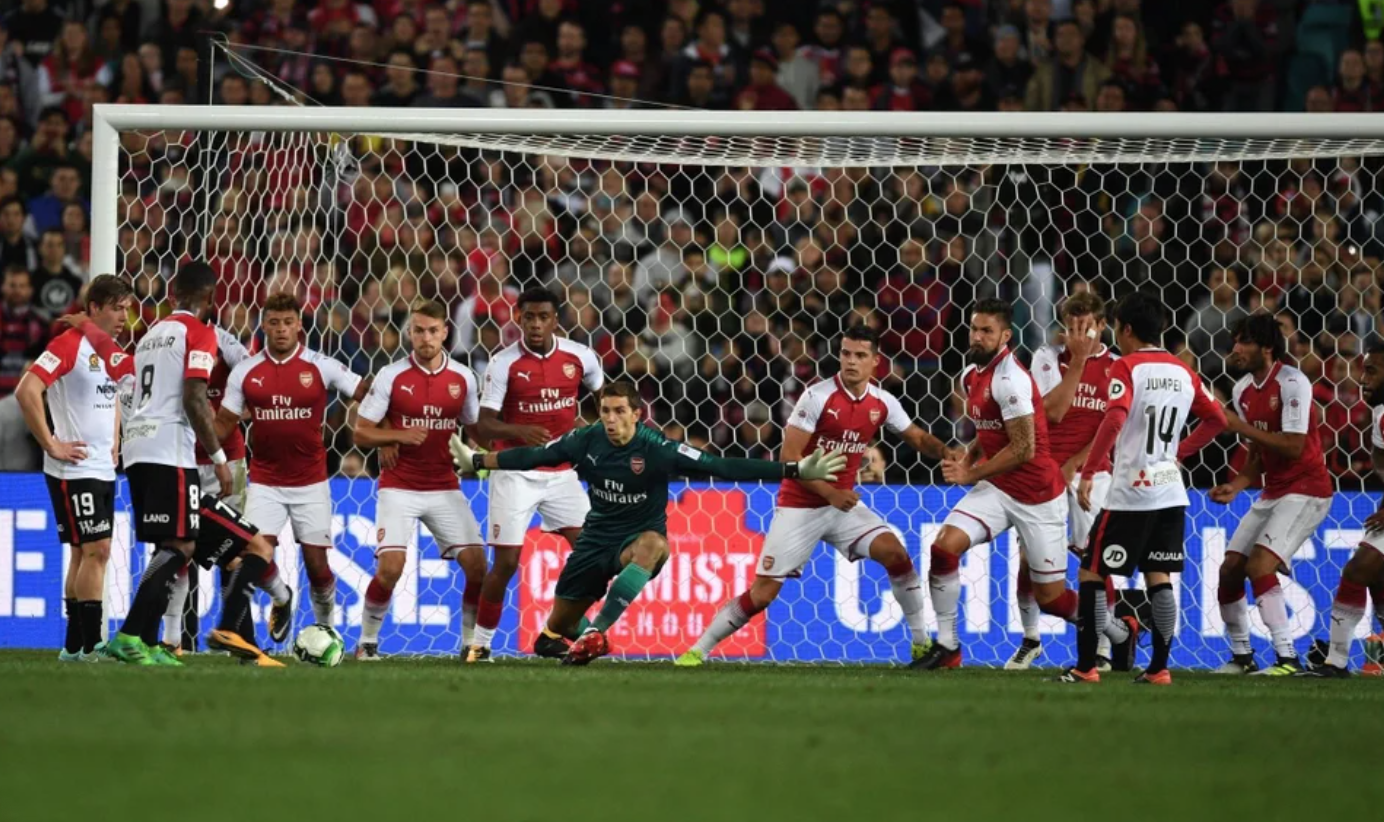 An Indirect Free Kick can be a beautiful thing. Just so we are clear this set piece is whistled by the referee when a player is fouled in a non scoring position. So what changes from a regular direct free kick? The ball must be touched twice before going into the goal by either team for starters. There is a lot of confusion around which types of fouls result in direct (you can shoot directly on goal) free kicks and which are indirect (must be touched twice).

This type of free kick can be incredibly dangerous and can consist of several players moving. off the ball, different fakes, jukes and hops over the ball in attempt to to confuse the defending side. Short passes, chipped balls and simulated confusion can also be a part of the trickery that goes on during such a set piece.

An indirect free kick is awarded after a foul has been committed that isn't your typical obvious foul such as a foul from a tackle or a hand ball. Before the ball goes in the net it much be touched twice meaning you cannot directly shoot and score on net without it touching another person either on your team or the opponents.

Sometimes it's difficult to know which free kicks are direct and which are indirect. You will know before hitting it which is which based on the referee. You can of course just ask them but if they have their hand raised in the air as they blow the whist you know it is indirect, no hand in the air means it is direct. To know which types of fouls lead to a direct and indirect free kick read below:

These are a list of offences that an indirect free kick is awarded for:

Keeper (any of these result in an indirect free kick in the box!):

1) If the keeper collects the ball, puts in on the ground and picks it up again.

2) If the keeper picks the ball up from a pass from their own teammate.

3) If the keeper picks the ball up directly from his own teammate from a throw in.

1) Plays in a dangerous manner

2) Obstruction (impedes or blocks the progress of an opponent)

3) Stops the goalie from releasing the ball from their hands

Indirect free kicks can be hit or miss and it takes lots of deliberate training to really make them effective and useful in a match. Obviously the ones that happen inside the box can be incredibly influential on the outcome of the game but what about the rest of them? If you are looking for an in depth analysis on indirect free kicks feel free to read this article on the Effectiveness of Indirect Free Kicks in Elite Soccer.

1. Play Quick - Like any free kick look to play it quickly before the defence fully sets up to exploit the space they have yet to fully cover. An indirect free kick can be complicated

2. Keep It Simple - Easy on the circus tricks and make sure you're not confusing yourself or your teammates with the lead up to your shot or service. A simple touch or pass of the ball then hit it, don't go wasting a great free kick opportunity because you wanted to try all these fakes and dummies.

3. Power Shot - The more speed on the ball the better chance there is for deflections, subtle touches and mistakes. Don't let the keeper or defenders off the hook by playing in slow and lofted ball that can be easily dealt with. Add another level of stress and difficulty for them by really whipping the ball into dangerous areas.

4. Touch Around the Wall - If you can have one teammate set up another with a slight touch to the left or right of the wall so they have a direct shot on goal. Not all of us are comfortable hitting the ball around the wall and on an indirect free kick if it goes straight in it does no good so see if you can by pass that completely. Remember to get it on to your teammates strong foot.

5. Set Up Your Strengths - What's the point of doing all this trickery if it doesn't set you up on your dominant foot to have a quality strike or service towards goal. The whole point of any free kick is to try and score so keep it straight forward and be sure that whatever action you do it sets up you or your teammates up for success.

1. Watch For Runners - Because of the two touch nature of indirect free kicks it's normal for the attacking team to try and slip a player in with some creative runs and misdirection. I identify the runners early and whether you're part of the wall or free make sure every player is accounted for before the whistle blows.

2. Don't Drop - After the attacking team takes that first touch don't drop your line and allow players to get in a position closer to goal. Keep your line high until that second touch (ball being served) happens.

3. Wall Break - If you happen to be one of the players on the outsides of the wall be ready at any moment to break off to track a sly runner in behind or past you.

4. Stay With Your Man - No matter the trickery, deflection or second ball be sure to stay tight with your man. I always like going with the rule feel and see your man.

5. Watch the Quick One - Before the referee count out the 10 yards the attacking team knowing it is an indirect kick may opt to play a quick free quick before anyone is set up. Don't turn your back to the ball and keep your eye on the ball and any players that they might be playing through.

1. Keep It Simple - Touch and strike nothing more nothing less. You already have a once in a season opportunity being so close to goal and all the time in the world to pick your spot. Have a teammate touch or pass it to you and lace it on goal.

2. Rebounds!!! - With close to 20 people in the box and everyone defending the goal for their lives you better believe there is about to be some chaos around the goal. Follow your shot and be ready to hit it again with second and third chances from rebounds and deflections.

3. Aim High - With the keeper likely off of their line and the defenders (who obviously can't use their hands) all on the goal line, hitting it by their heads or above is a choice with high success rate. Some will get scared and duck away or hit it into their own goal where others will cover up with their hands and win you a penalty. Make sure you put some venom behind it and make it really tough on all of them.

4. Identify the Keeper - It's important to notice the goalkeepers positioning when hitting an indirect free kick in the box. It is normal for the keeper to stand in the front of the wall and track the movement of the ball in attempt to save it. So have a look at the keepers positioning and see if that changes the angle which you want to shoot it from. Most keepers will come sprinting out so be prepared to bend it around them.

5. See the Bullet Man - With a free kick such as this one it is common for a team to have a bullet man who on the first touch of the ball sprints out like a mad man in attempt to block the ball (take the bullet hence the name) to stop the scoring threat. Have an eye out who looks like they are about to sprint off of the line and attack the ball, then try and shoot the ball in the space he vacates.

1. No Fear! - As your team lines up on the goal line a ball is about to be riffled at you and the one guy that turns their back or hesitates will the be the guy everyone blames for the goal, don't be that guy. Jump straight up (don't turn) and take the ball on the chin (let's hope that's where it hits you).

2. Bullet Man - If that's you then you are sacrificing your body for the good of the team. Your job is to run (but not over run) the ball after it's first touch in attempt

3. On Your Toes - There's always the chance the shooter will try and be slick and shoot it low as you all jump, be ready for all shots by standing and lightly hopping on your toes so you can read and react to the ball in whichever direction it may go.

4. Second and Third Shot - Just because you or a teammate block the initial shot don't think your work is done there. With all of those bodies in the box it is normal to expect another shot or two off of a deflection or rebound, stay focused.

5. Clear the Ball - It goes without say but I'll say it anyways, this is not the time to try and pass it out or dribble out of danger. If the ball is on or close to you then your job is to clear it as high and far away from danger as possible. No time for anything cute here, you've done your job by stopping the dangerous free kick no send the ball up and away. 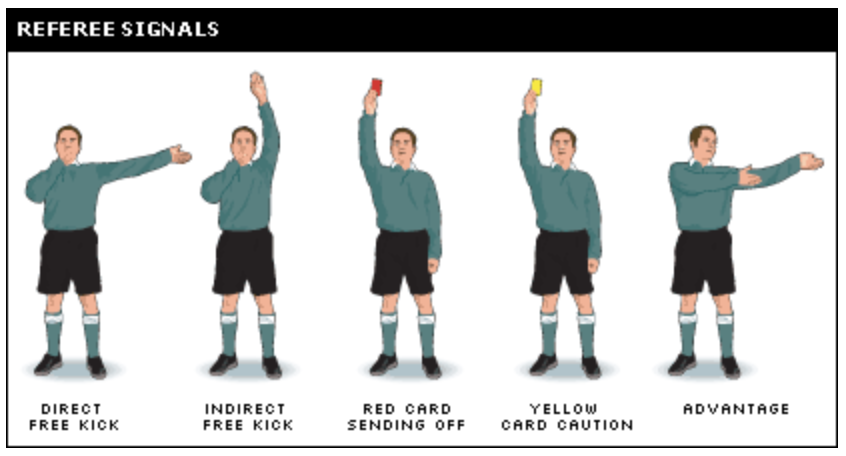 When lining up to take an indirect free kick you have two options, either serve the ball or shoot it on net after it’s been touched. There are a few factors you have to consider when making this decision, they are:

1) How far out am I? - Everyone knows there on range and leg strength, so consider this factor when seeing if striking on goal is the right option.

2) Is it on the right angle for me to hit it? - Can you bend one in from this angle or is the keeper in position to easily handle it is the question you need to ask.

3) Am I better off playing it in the box for my teammates to finish? - If you're not comfortable going for goal you need to consider swinging in for a teammate to finish, if you're not sure your answer is probably serve it to a teammate.

Whether you decide to shoot directly on goal or play a ball into the box you need to consider which choice is best for the current situation. Set plays are big part of the game and a player or team that can make this their specialty can be a very deadly team whenever the whistle is blown. With an indirect free kick you can get a bit creative and design plays that will throw the defending team off.

These generally consist of fake runs, shorter passes and players sprinting into open areas. There really is no limit to what you do here but simplicity rules supreme.