can you believe that the highest paid soccer player actually makes that much?! 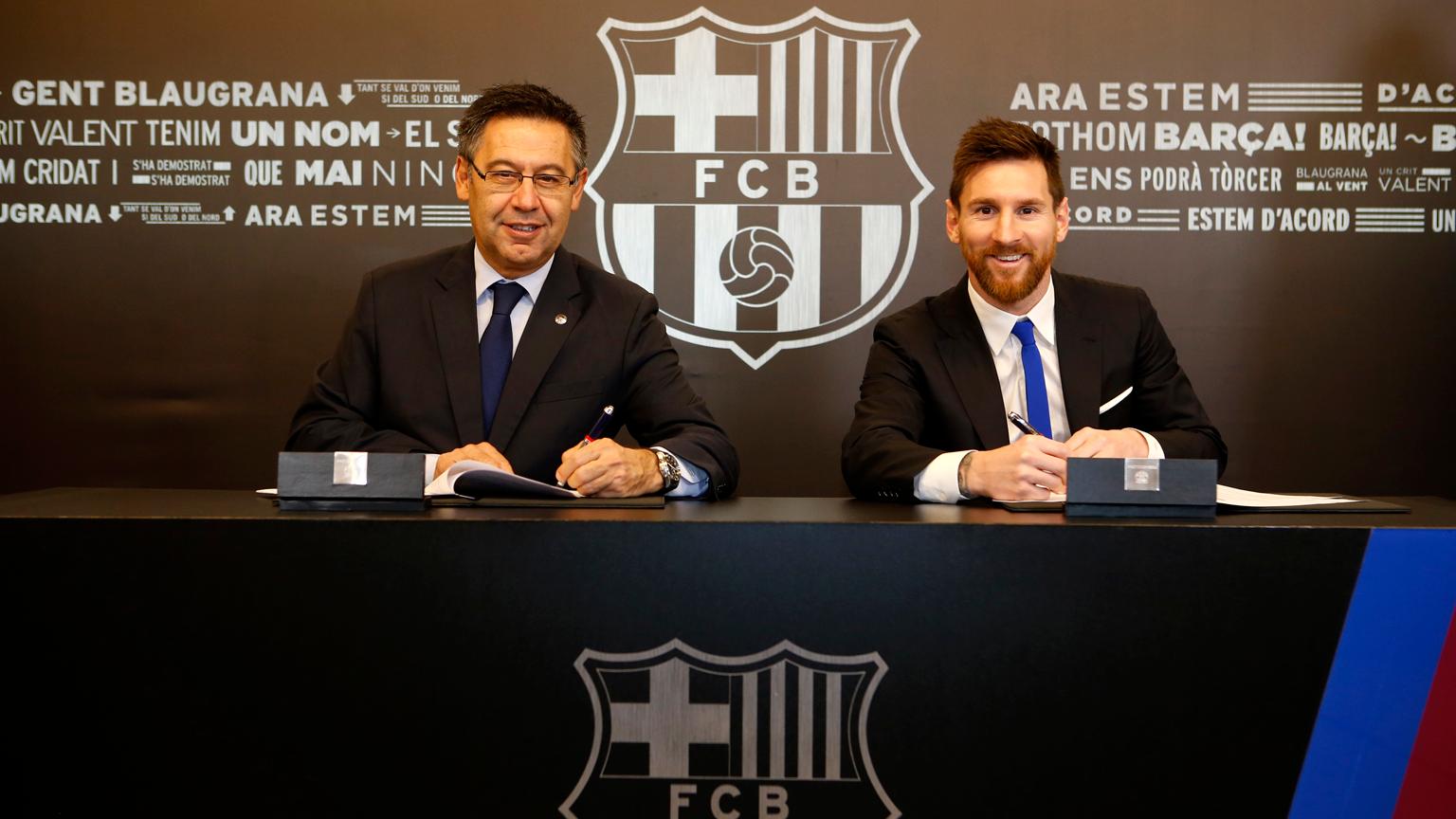 Love of the game or money? What does the highest paid soccer player in the world who is making hundreds of millions of dollars to chase a ball around the field play for? Sometimes it's hard to believe that the top soccer players in the world are making all of us this money but guess what? It's not their fault the game is so popular and their skills are in demand, they just play the game.

If you've every wondered who, what and how the highest paid soccer player and players around the world get paid and how you can maybe get to that level one day then all your answers are here. Highest paid in each league, team and the world along with the highest transfer fee and other ways these soccer players make their money besides just scoring goals on the pitch. If your favourite team is looking to sign one of these players one day well they better have their cheque books ready because money talks!

Oh and if you're thinking you want to be one of these players there's even a list of must haves to be in this category, love the ambition by the way young Ronaldo!

who is the highest paid soccer player in the world? 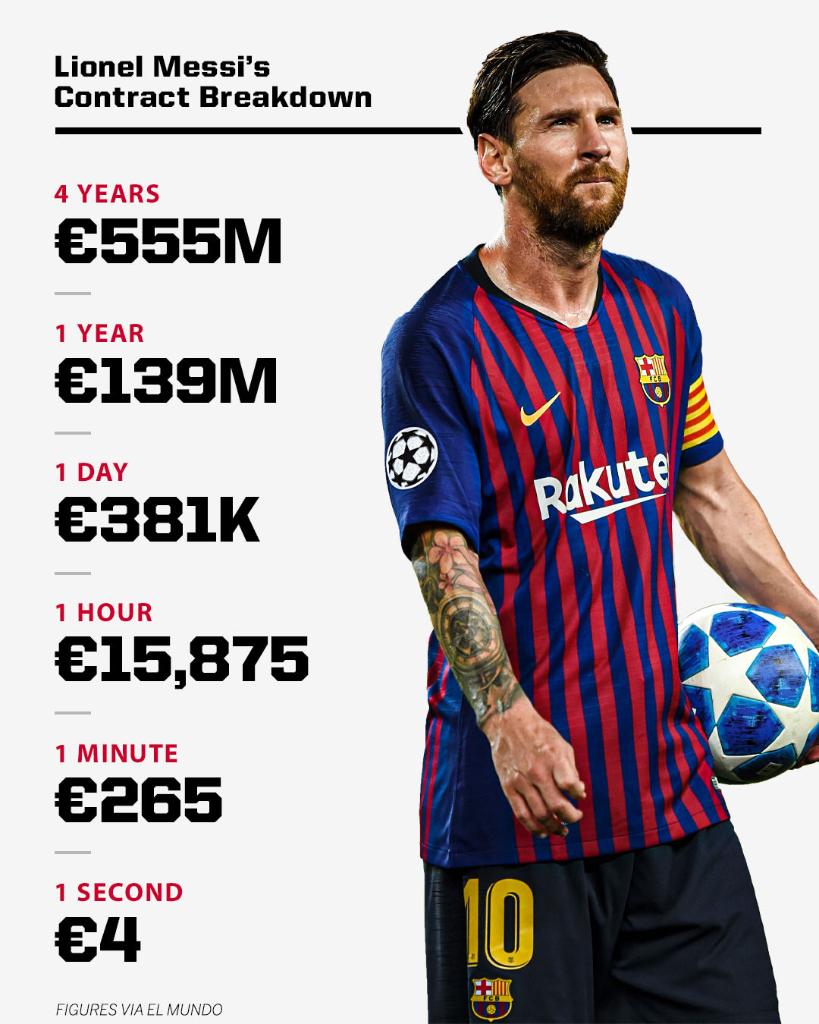 The million dollar question (literally), the top spot goes to Lionel Messi with a whopping salary of $167 million annually over four years that expires in June of 2021. Not bad for a kid from Argentina just playing the game he loves, scoring goals and taking names. This annual amount includes not only on the field performance but also incentives, image rights and other sponsorships. This is a four year deal totalling to over $670 million dollars is the largest contract of any athlete on the planet, so if you ever end up at dinner with Messi, he can pick up the cheque.

For all of Messi's contract details feel free to check out this article that gives you the Full Breakdown of Messi's Contract.


who are the top 5 highest paid soccer players? how much do they make a year?

what are other ways the highest paid soccer player gets paid?

1. Incentives - Every top soccer player has different performance incentives in their contract that will bring them a higher income. For example team achievements will get the player more money such as winning the league, qualifying for the champions league, winning the champions league and other such team achievements. On top of that there are also other individual performance incentives that will trigger other pay bonuses such as amount of goals scored per season, amount of starts or number of assists and those types of things. Sometimes when you watch a team win or lose on TV and see the players so upset yes of course they don't like losing but also they know not only did they lose the game but they also could of missed out on a pay day if they had just won that game or scored an extra goal or two.

2. Image Rights - Many contracts (the higher end player specifically) also get to keep a portion of or all profits that have to due with selling their image. This in the sporting world is called their "likeness". What that means is they get to keep a portion of the profits of any pictures, signatures, jerseys or anything like that which is unique to the player. This may not sound like much but this can be a serious part chunk of change when you consider how big some of these superstars name and brands are worldwide. Players like Messi and Ronaldo will of course make sure that their contract includes them owning all of their image rights because we are talking upwards of $50 million a year for players of their level.

3. Sponsors - A lot of professional players have different sponsors that they promote or wear that also goes into their yearly income. You may notice that Messi wears Adidas cleats even though Barcelona is sponsored by Nike. This is typical for players to control their sponsorships like cleats and other clothing they may wear off the pitch. Other sponsors may include the type of car they drive, watches they wear and even places they go eat to receive payment for an appearance fee. Must be nice right?

4. Former Clubs - Sometimes when a player gets loaned from one club to another the club that is loaning them out may help pay part of the players salary to make the transfer work. So parts of a players annual salary may come from their previous club and their current club to make up the grand total amount owed in their current contract. Loaning players out for a certain amount of time is a different topic altogether but it's good to know where the money flow all comes from.

how does the highest paid soccer player decide his contract? does his agent do it? how much does the agent get?

The negotiation of a players contract can be a quick process or a dragged out long process over several months or even years! Typically at the highest level players have agents who speak and negotiate with the club about their contracts on the players behalf. Players aren't the ones who demand a pay raise or a contract extension and march up to the sporting director or president's office asking for more. This is the job of the players agent and they are typically compensated anywhere from 7-12% of the players contract for doing so. This may not seem like much but when agents have 6 to 10 players who they negotiate for this really starts to add up, it is not uncommon for an agent to be making millions for negotiating some of the top players in the world.

Once again contracts are a long and sometimes incredibly stressful process that take all the different parties involved to come to an agreement. The club, the player, the agent and of course the family of the player all need to agree on terms of the contracts before it can be finalized. These contracts can have such fragile terms during the process of negotiation that could affect them both positively and negatively. Such things as serious injury, how much the player is demand, what kind of form they are in and so on and so forth. If there is anything stressful about being one of the best players in the world it is most certainly the contract terms and negotiations.

why is messi the highest paid soccer player?

How about he leads the world in scoring practically every year for starters. It is no coincidence that one of the greatest players of all time who has the biggest affect on the games most influential aspect (scoring goals) is the most valuable and therefore gets paid the most. But there is a bit more to it than just that. Messi was scouted and brought over to La Masia (Barcelona's in house soccer academy) at the age of 12 and being with one team his entire career actually has its benefits form a contract and pay perspective.

Because there was no large transfer fee from one club to the other Barcelona has able to pay Messi more in an annual salary than having to use some of that money to pay another club to transfer him to Barcelona before paying him his salary. This definitely helped in negotiating Messi's incredible 5 year contract but was only possible because of his obvious incredible talent and affect on Barcelona on the field and as a global brand having winning seasons with the world's greatest player.

1. A Great Agent - If there is one thing that matters most in becoming the highest paid soccer player in the world it's having a great agent. Having an agent with a great reputation is as important as the skill in your feet as they will come in with the reputation to make these types of deals and the contacts from clubs who trust he knowns what he's doing and only signs players of exceptional talent. So before you start dreaming of playing for Real Madrid and Man City makes sure you start building your portfolio to acquire an agent of the highest level.

2. An Interested Club With Deep Pockets - To get yourself to the contract negotiation levels of the highest paid soccer player in the world you are going to need a suitor who is in demand of your position and has the bank roll to support it. Some of the biggest soccer signings have been from teams not only who have the financial capabilities but also the team that has the biggest need for that position. No use in getting your hopes up and telling your agent you want elite money in your next contract if you play the same position of the teams best player.

3. Elite Talent - I think this goes without say but i'll say it again, to get a contract of the top 50 in the world is going to take some incredible out of this world level of talent in those boots of yours. Manage your expectations and if your level of play is not of those players then get back to the lab and stop thinking you and Messi are about to be contract buddies. If you're not by far the best player in your league, state or even country don't be expecting big time contracts like some of the superstars listed above, sorry young Neymar back to the training pitch for now.

4. Age On Your Side - You can be the best thing since sliced bread but if you're pushing 30 and bursting onto the scene don't expect a long term lucrative deal. Some clubs have rule that they only give 1 year contracts for players above the age of 30 and anything above 33 is looked at the twilight of your career. To get a contract to be the highest paid soccer player or players in the world you're going to need to have age on your side, more specifically you better be under 27 and playing soccer that is god like, no your Sunday pub league will not do to become the highest paid soccer player on this planet.

Sorry to all the young Mourinho's and Pep's out there but coaches don't come close when it comes to pay to the people that make them look good (the players). To give you an idea the highest paid coach in world football today is Manchester City's Pep Guardiola at a modest 22 Million Euros per season, Messi is paid at least 100 million more than that and let's be honest, rightfully so. Although coaches are paid well in the greater scheme of things the different between player and coach is quite large, try to become a pro player and you can always use coaching as a fall back (if only it were that easy).

which player has had the highest transfer fee?

In Euros here you will find the top 5 biggest transfers in football history, now this doesn't mean this is how much the player gets paid, this is the fee one club must pay to the others to add this player to their roster and sign them to a contract, the annual wage of each player is done after the transfer fee.