Help me!!! High school soccer tryouts are coming up!! 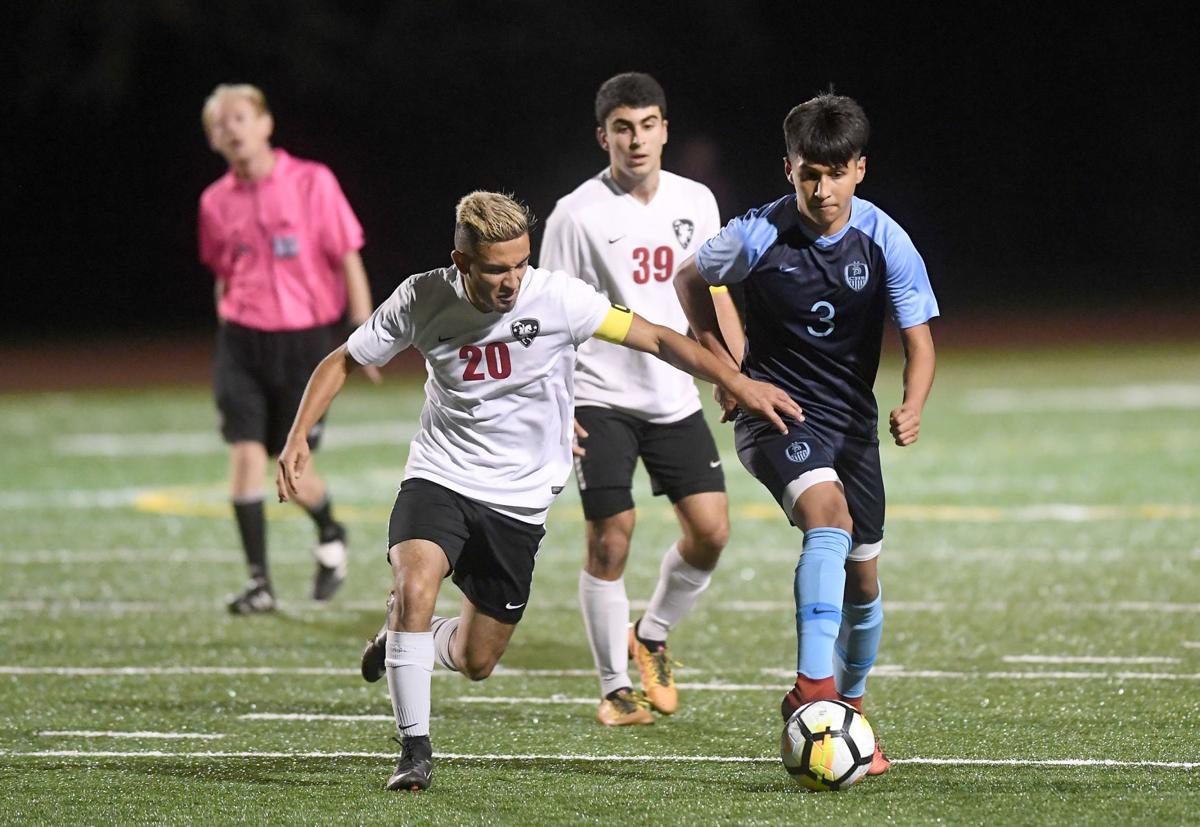 If you're reading this from your coach with chips all over your shirt well it's time for a makeover, actually just stay there your probably not serious about this. Still reading? Okay that was a test, put some running shoes on, go run a few miles and I'll be waiting for you here for the next set of advice.

You're going to want to make a great first impression once you get there and after you've made the team you better keep that up if you want to take your team to the top of the high school soccer mountain. Some players play themselves out of a position on the team by their bad attitude, being unfit, uncoachable and just overall a selfish player. As much as it's important to do all the right things throughout tryouts and season be sure to avoid some of the most common pitfalls when trying to make a team. All of the things to avoid along with tips, what coaches are looking for and other things you just need to know below, so wipe those chips off your shirt and keep reading. 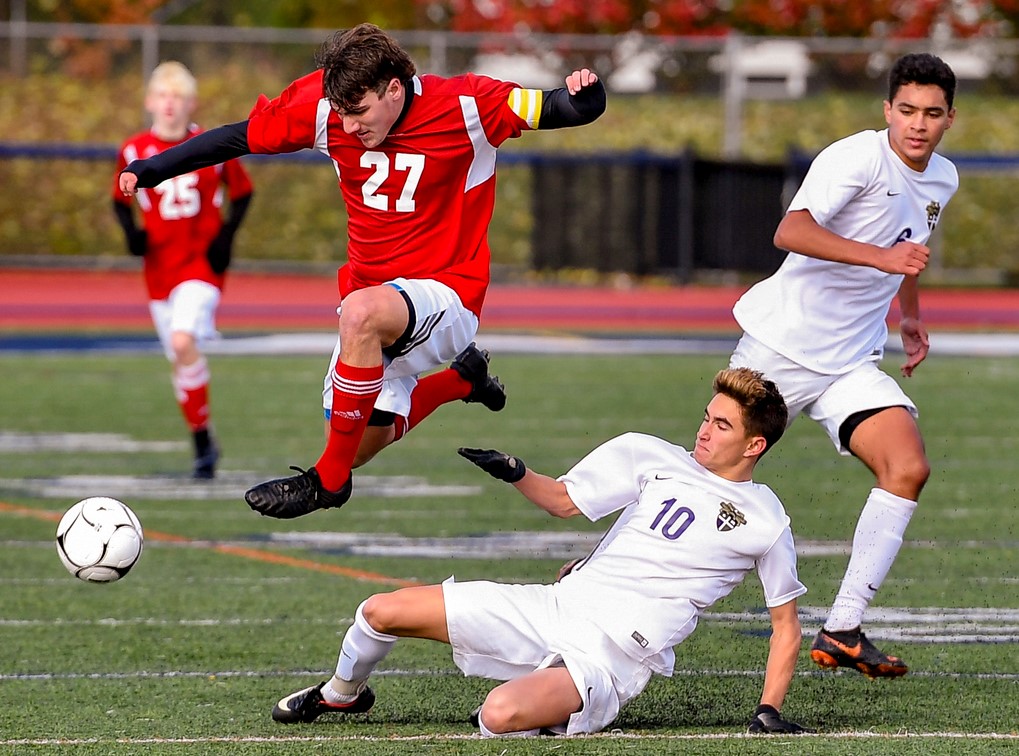 1. Be The Fittest On The Team - You're trying to make the team both on and off the field so showing up early and getting warm and ready speaks volumes to how serious and professional you are when it comes to this team. The first thing the coach is going to notice is those players that show up early, the ones that show up just on time and those that show up late. In the coaches mind this will be a sign of things to come so if you're serious about making this team be in the group that impresses the coach. If you want an example of some of the fitness testing and other physical tests you may go through find them here, Fitness Tests For Soccer.

2. Keep It Simple Then Pick Your Moments - It's okay if you're nervous and want to to impress the coach by trying to dribble everyone and do all these fancy moves and tricks but fight that urge. Try and play the simple safe passes throughout the tryout and when you have the chance to add a little spice of special such as a shot on goal from distance, a great assist, cross or dribbling a player or two then do it. Don't be trying non-sense all game long and on the tenth try you execute it after losing it the other nine times, this ain't impressing nobody. Play fast, simple and selfless then pick and choose a few moments (when they're on) to show a little bit more class.

3. Be A Specialist - If the coach asks you what position you play don't say five different positions. Pick one position that you are best at and stick with it, center midfielder, winger, striker, outside back, center back or goalie. Whatever you do don't say you're a goalie and a striker, I know you might be thinking that being able to play several different positions will help your chances but it really does the opposite because you lose credibility as a player. A coach wants to be able to select a player because they are experts in their craft in their position, jack of all trades....master of none.

4. Communicate Nice and Loud - Every coach likes a loud, communicating leader out on the field so try and be that for your team. Try not be that guy that is just yelling non-sense all game and actually give meaningful instructive direction to your team no matter the position you play. Whether it's words that will help your team be more organized or if it's just words of encouragement, a great way to stand out as a valuable team player is to instruct your team to victory.

5. Introduce Yourself & Be Engaged - Make sure you shake the hands of all the coaches once you get their and introduce yourself so they know exactly who you are. Give good eye contact and shake their hand firmly, now you're off to a good start. If at any time the coach says something to you individually or to the team in a big group be sure you are listening closely and giving them eye contact. There's nothing worse then a player not paying attention or not looking at you when you're trying to tell them something, this will rub coaches the wrong way so be sure to give them your full attention and respect.

top 5 things a high school soccer coach is looking for 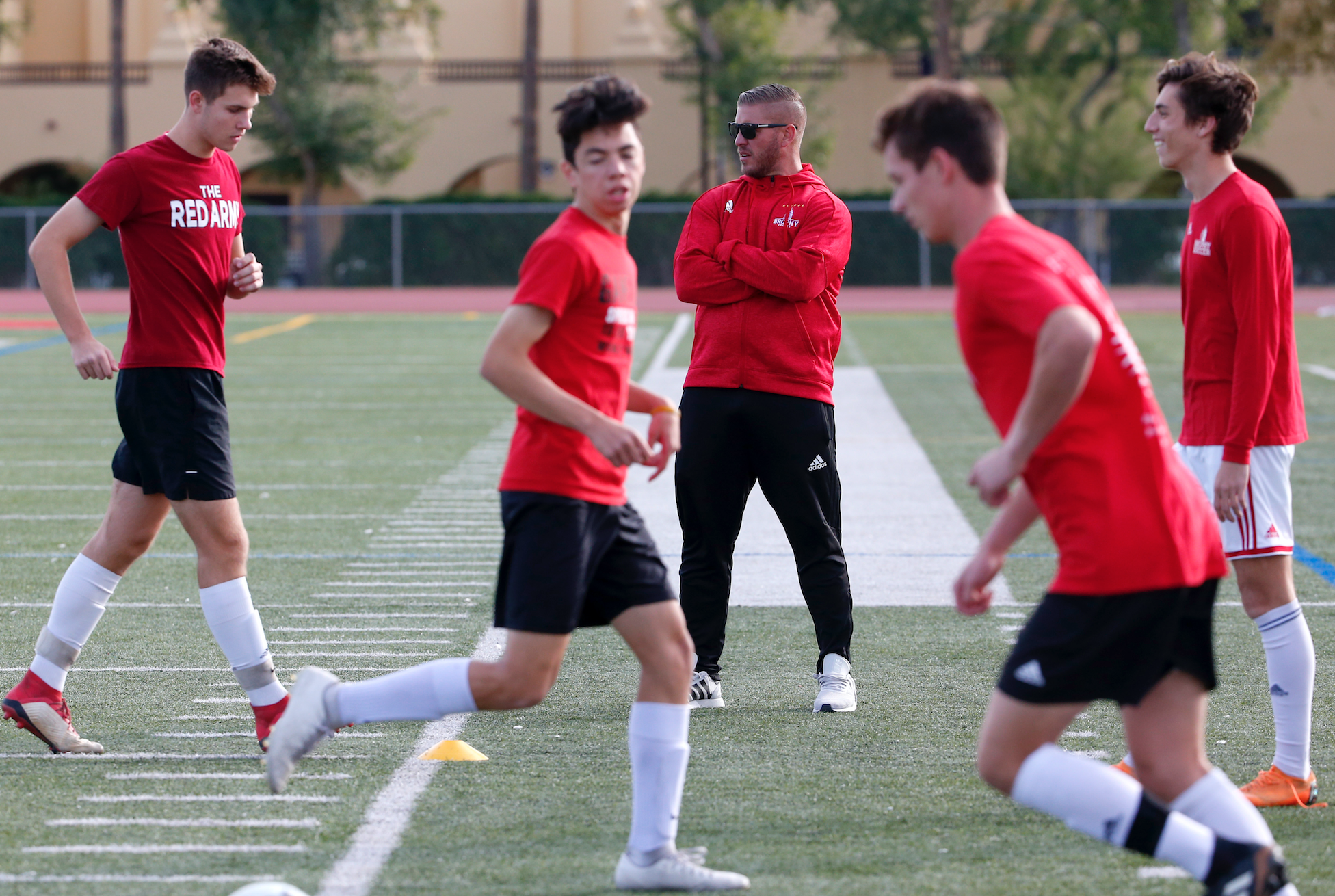 1. One Elite Physical Quality - Coaches are looking for a player that has one physical quality that stands out amongst the rest. Whether it's blazing speed, strength on the ball, a high vertical or someone that has elite conditioning a coach wants players that can affect the game with their mind and their body. If you're reading those and can't think of which one you have then you need to create your own, what I mean by this is maybe you weren't blessed with any physical gifts but you are in control of one of these, your physical fitness. No matter which cards you were dealt with at birth your conditioning is something you are in complete control of and can be the best on your team at if you put the work in.

2. Fast Decision Maker - The best players in the world are the fastest thinkers and have the highest IQ and every coach loves a player who plays quick and decisively. Try not to dwell on the ball too much and try every role, flick or meg you've seen on YouTube the entire tryout, try and pay simple and quick and let the ball move. The players that succeed at every level are the ones that can make decision before they receive the ball, be that type of player and you will increase your chances of making the team just like that.

3. Positive Attitude - Everyone likes to be around people that are friendly, positive and that have good energy whenever you are near them. Having a positive attitude during the tryout or season is something that every coach admires and looks for when selecting a team so whether you make a mistake or a teammate does be sure to continue to spread that positivity to the team.

4. Hard Worker - Every coach admires a player that roles up their sleeves and puts in a shift every time they show up for work and lace up the cleats. Bring high energy and work rate to the practice and game environment and you will always have a spot on the team as someone with a heart of a lion. If you wan to take that hard work to the next level come before practice and stay after it to work on your game and be an example for other players to follow.

5. High Technical Ability - Your touch, the way you dribble and the way you execute all matters and plays a big role in being technically proficient. You can be the greatest athlete in the world or have the best attitude but if you want learn to master the ball at your feet you won't get very far in this game. Make sure to get a thousand touches in every single day so come tryout or season time you're flying and looking like you should be working in the circus with that juggling and dribbling. 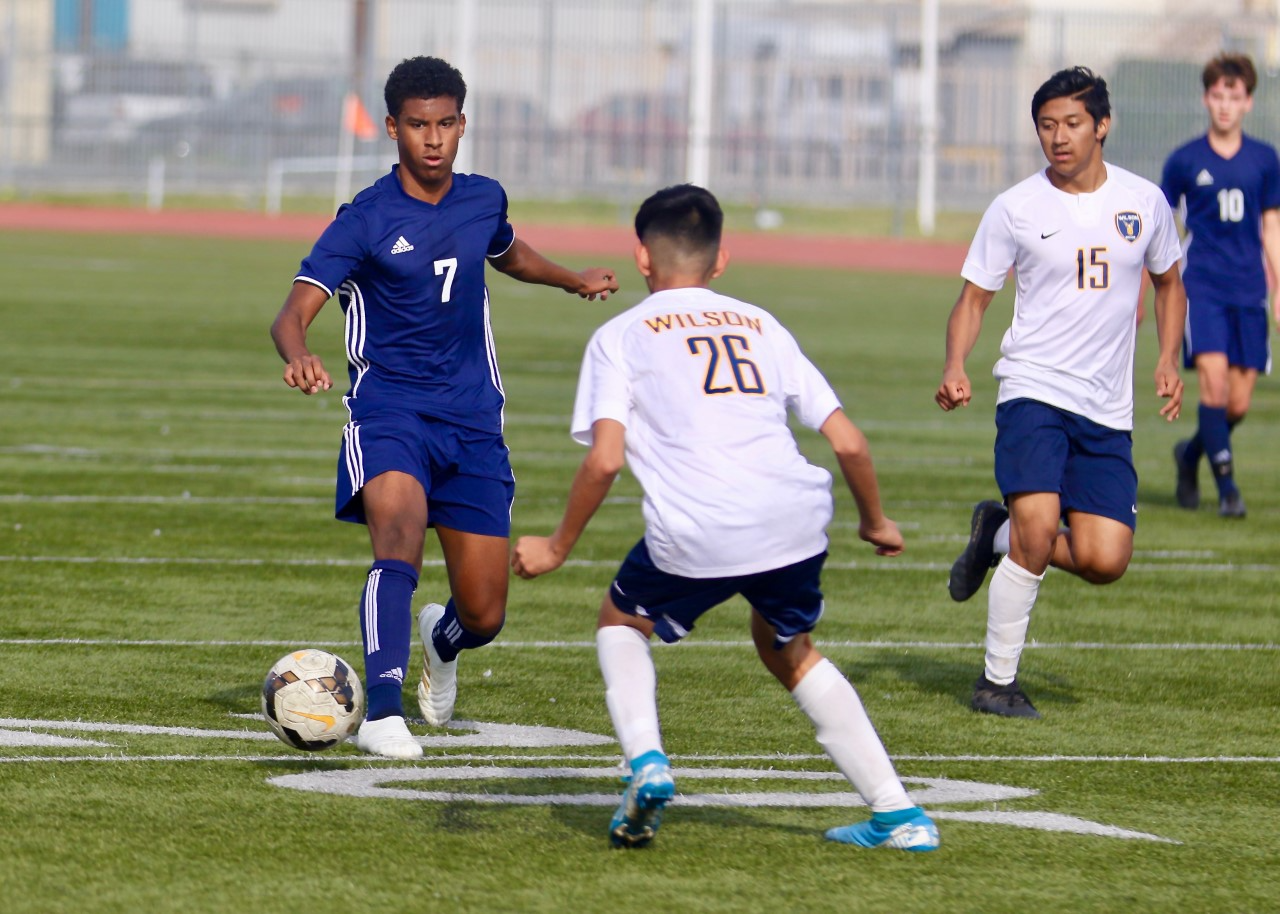 1. Showing Up Un Fit - If there is anything you should avoid it's showing up to a high school soccer tryout or pre-season and can hardly get around the pitch because you've been on your couch all summer. For all the things in life and soccer we can't control being physically fit is one thing that is in all of our hands so have some self discipline and put in the work.

2. Arguing With Seniors - Don't be that player that thinks they're Mr. or Mrs. Know it all and pick fights and argue with senior players or coaches on the team. Have a voice but respect the leadership of the team and if you have something to stay that you strongly believe in find the right time and place to express it, that time and place is not in the middle of practice where everyone can hear it as you go chest to chest with a senior player.

3. Talking Behind The Coaches Back - No matter how much you disagree with the coach and their decisions you never have the right to talk behind their back. What you're doing is building distrust within the team and only looking out for yourself, there is a time and place to talk to the coach about things that may be on your mind and those are one on one where you can sit and discuss things civilly. Any good coach will welcome players to discuss team issues with them, the time and place is behind close doors when emotions aren't running high to get your thoughts and concerns out onto the table.

how many players make a high school soccer team?

Well it of course depends on a lot of things such as the coaches preference, the amount of players he has to choose from and so on and so forth. Typically a team has about 20-24 players with 18 allowed to be on the game sheet on match day, 11 obviously start the game and seven on the bench as substitutes.

The reason a coach will take this many is to have capable reserves should someone can injured or fall out of favour throughout the course of a season. The coach may also want to carry a big roster to have a competitive practice environment where nobody's spot is safe and should the coach want to play a full field 11v11 scrimmage at practice they have enough bodies to do so. The number of players may vary from year to year for various reasons but 20-24 is typical for any high school soccer team.

how long does a high school soccer season last and how many teams are there?

Well of course the answer is that it depends. It depends on what region your school is in but typically a high school soccer season will last about 10 regular season games and then playoffs after that. So you're looking at anywhere from about 10 - 16 games from start to finish in a typical high school soccer season. The amount of teams really depends on where you live and play but conferences usually don't go more than 10 teams. This means you can expect to play approximately 10 games against 10 different opponents not including playoffs.

are seniors the only ones that get to play?

Even though you may think that the seniors are playing high school soccer will play the most and everyone else needs to fall in line this isn't exactly true. For the most part a coach wants to win and he will play the players that best puts the team in position to do so. With that said a coach needs to balance the team moral, fitness and effectiveness of every player when deciding to play them or someone else. Typically if everything is even and the coach can't decide between two players who are so close he will typically go with the senior because they are more experienced and it will cause less friction within the team and the teams hierarchy. Sucks but true my friend.