want to Become a Free Kick Specialist?
watch out for that wall! 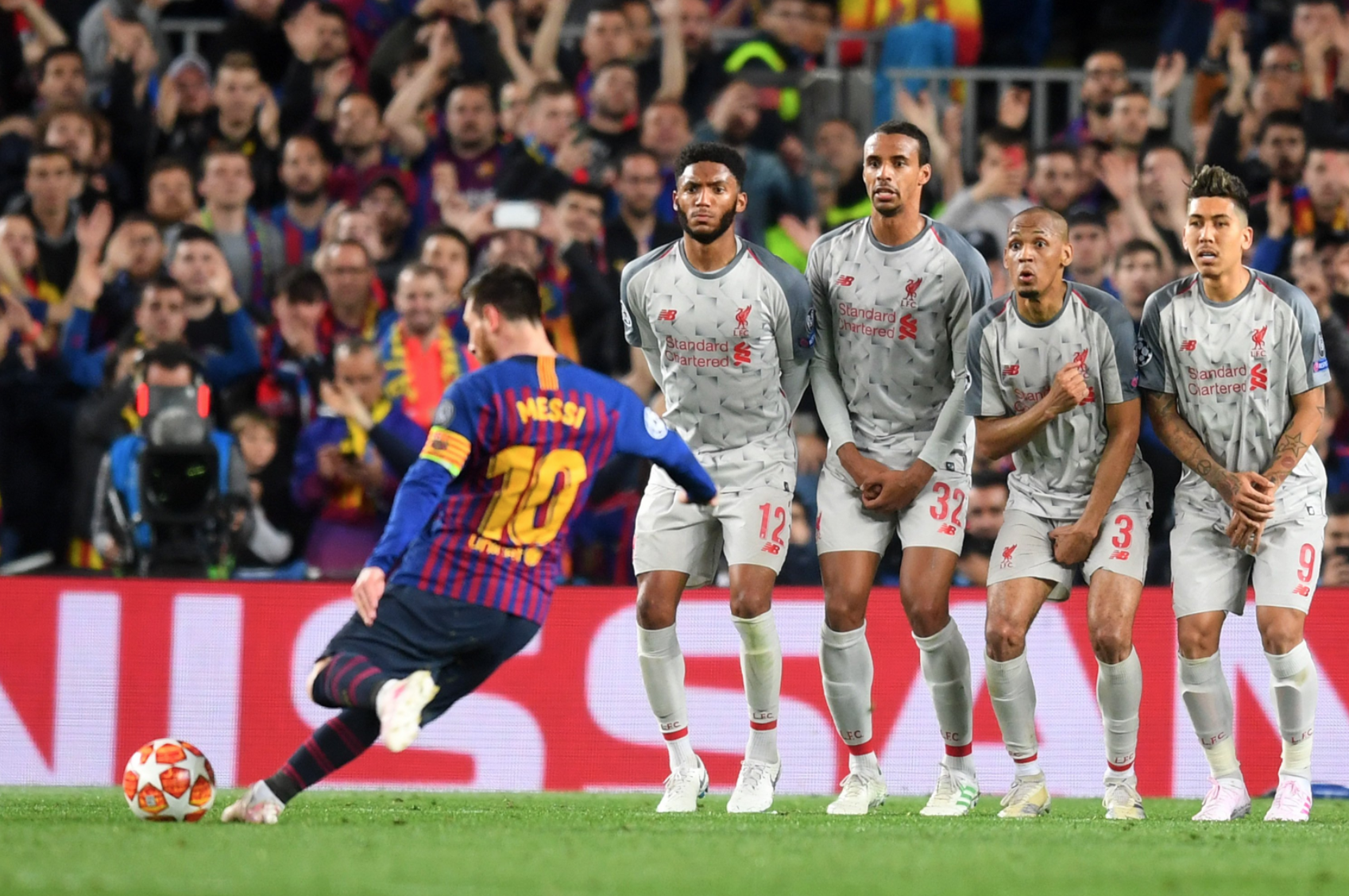 A free kick not only changes a game, but turns it upside down. You can be getting run for the most part of the possession, and one set piece bomb can make it all better.

If you're looking to become your teams dead ball specialist then you've come to the right place. Pro's explaining it to you step by step and giving you tips to keep the keeper off balance.

Hmmm, power or placement? or a bit of both? Decisions, decisions....

Using Placement for your shot is used as your set piece gets closer to the goal. Generally using the inside of your foot and ideal for when the ball is just outside the box or even a yard or two back will do. Up and over the wall is the name of the game.

how to take a direct free kick video

more tips on how to go about practicing your free kicks

top 5 things to remember when taking a free kick

1. Only Think About Contact - When taking a free kick there are so many things to worry about like the wall, the goalie, your teammates wanting to take it, how and where you're going to hit etc etc. Eliminate all those distractions, keep your head down and focus on just making great contact with the ball and nothing else. Forget about everything but kicking the ball exactly where you want at the exact power you want and you will be just fine.

2. See The Ball Going In - Confidence is half the battle. If all you're thinking about is how you're going to shoot it over the net or how badly you're going to look if the shot isn't quality then that's what's going to happen. Visualize the ball going into the net over and over again before you shoot and believe it will. Then make it happen.

3. Give It A Chance - What this means is make sure you force the keeper into save. That' doesn't mean shoot it directly at them but be sure that before anything else that your shot definitely must hit the goal. By missing the target completely not only do you eliminate the chacne of scoring directly but you also eliminate the chance of a rebound, deflection or keeper error. I know none of us are trying to miss but adjust your aim slightly so it is sure to be on frame.

4. Build a Routine - If you've ever seen a kicker in American Football hit a field goal you'll know exactly what I mean. To help calm the nerves and narrow your focus have a set routine you always follow before hitting the ball. This can include self talk, 2 steps back and 1 to the side, taking a big deep breath like Ronaldo or anything else that gets your muscle memory stimulated.

5. Be Flexible - The shot you want may not always be on, read the situation such as the wall set up, the goalie positioning and the distance and look for the best solution not just the one you wanted before shooting.

top 5 things to avoid when taking a free kick

1. Know Your Range -Let's face it, we all know from what distance and angle we are comfortable hitting a free kick and which ones we are not. If you have a teammate who you know is better suited to hit them from a certain spot than let them, why? Simple because it's in the best interest of the team scoring. You will also lose credibility next time when you want to take one, stay in your lane and hit the ones you know you can.

2. Trying Something New - Thinking of trying this new technique or shot you saw once on TV in the game? Think again, games for executing the shots you've been working on and practice is the time to polish that new skill. Stick to what you know and what you're good at, trying something for the first time in a game will only lead to trouble.

3. Non-Dominant Foot Use - If the angle isn't quite right for your favoured foot and you are considering hitting with your non-dominant foot then that should be sign for someone else to take it. Let's say you are right foot dominant and want to hit an in-swinging ball into the box but the free kick is on your teams right wing. Ya you can try it with your left and if you do no issues but make sure you are super confident in it, my suggestion would be to hit it flat or out-swinging with your right. It's better to have good accuracy, power and height on the ball then give all those up to have it in-swinging in my opinion. So stick to your strengths and hit the ball that makes the most sense here.

4. Over Hitting the Ball - We've all seen it before as the ball skies over the goal time and time again off of a free kick. Be careful of aiming only for the top corners and running the risk of the ball going way over. It's ok to aim high but aim a touch lower and inside to ensure it hits the frame.

5. Plant Foot Injury - When you place the ball down and start measuring your run up be sure to have a look for uneven ground, divets or holes on the pitch where your plant foot is to go. Even if it's turf be careful of an uneven surface where your plant foot could buckle or step onto causing serious injury. A quick inspection will do.

should i use placement or power?

Striking the ball with Power (generally your laces) can also reap several benefits not only scoring obviously but deflections at high speed are difficult to handle as well as the keeper has to keep the shot secure and be careful of spilling rebounds.

So which is it, A or B? Well it could be both, combining placement and power with a little dip can prove to be beneficial as well depending on where the set piece is being taken from. Just you versus the keeper, this is as much of a mental battle as it is a physical one. Don't cheat now keep, you'll be on GOL TV bright and early.

Now it's on your shoulders Becks, let's see what you got.

Well if you have the luxury of having two quality free kick takers on your team from both sides then consider these factors:

2) What kind of ball do you want shot based on the keepers strengths (high, low, driven, knuckle etc)

3) Who feels more comfortable taking it

Free kicks depend on several factors not just whose boots are the brightest, or has the best goal celebration. Most teams at the professional level have set players that take these free kicks. Teams depend on these players to give them positive outcomes and goals from such areas of the pitch. Whether it's a shot on net or dangerous service into the box these players be masters of their craft.

If you want to know some reasons an official may whistle a free kick in you favour feel free to read through this article so you know what you need to do for a ref to whistle a Direct or Indirect Free Kick in your favour.

should i go over or around the wall on a free kick?

The million dollar question, over or around the wall? Of course it depends and it all comes down to three critical factors such as

1. Where the shot is from

3. Where the goalie is standing

Whether it's over or around (or even under!) elite players no how to use a unique combination of both power and placement on their shots. If the ball is placed perfectly but hit with no pace the goalie won't need to leave his feet to get behind the ball. If it's all power then you're giving up so much accuracy and the ball could end up on the freeway. Over or around you need to make the call, consider these factors when deciding:

1. Is the wall line up properly cover the post or can you sneak it in

2. Is the goalie cheating to one side or behind the wall? If so slot it in where he isn't.

3. Get the right combination of power and placement and have your team chase you around the pitch celebrating.

SHOULD I SHOOT GOALIE SIDE?

You can. If you feel the goalie is cheating and anticipating you’re going to put it over the wall then go for it. Make sure it’s hit with some venom though; you don’t want to catch the keeper cheating then have them shuffle back over and catch your balloon of a shot in their hands. 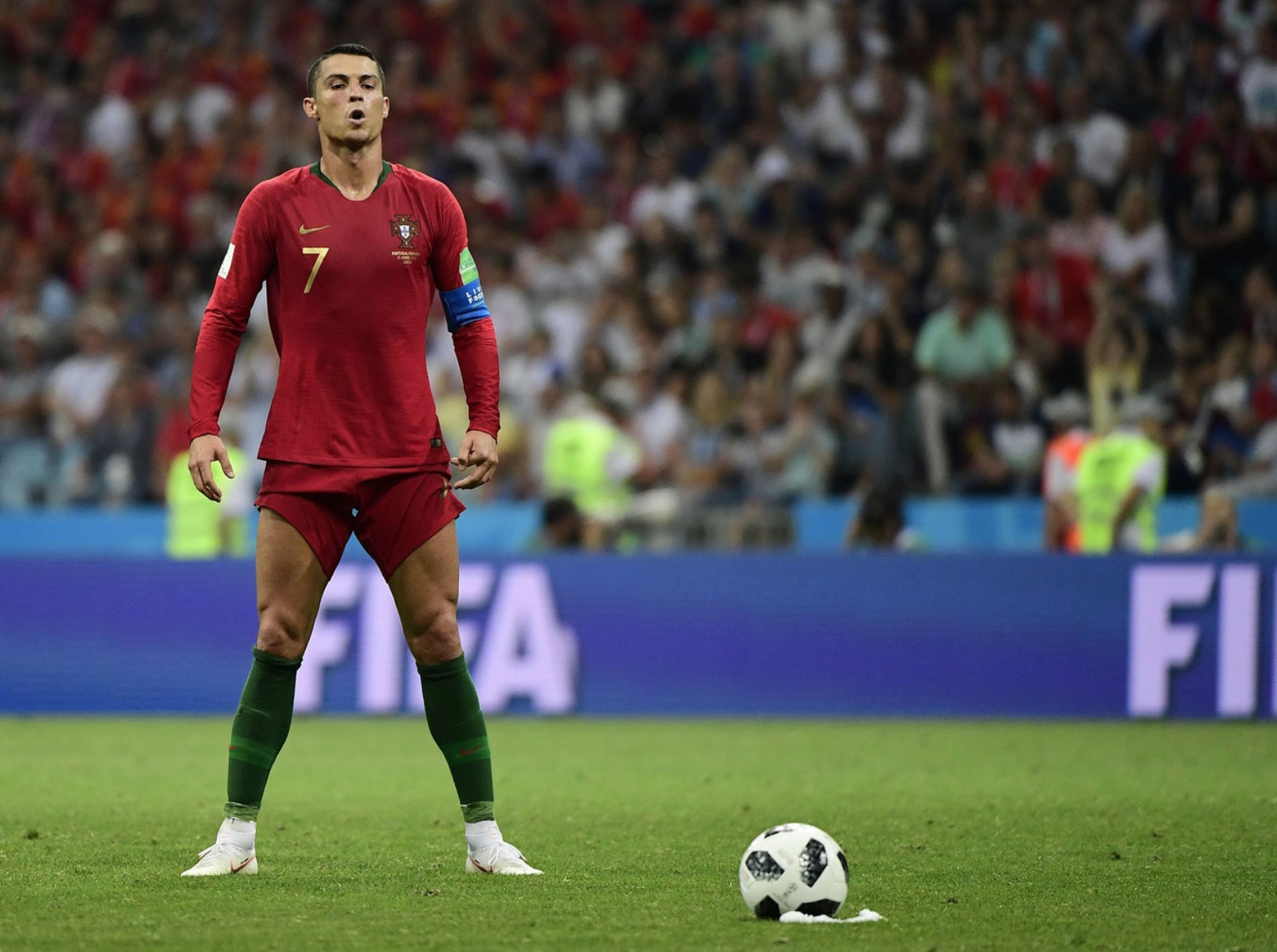 Why Doesn't the Defending Team Put Players On the Goal Line?

A commonly debated question in soccer is “why doesn’t a team put players on the goal line when there is a free kick just outside the box? Or put their wall on the goal line?”

Well it seems to the naked eye that this would be wise right? The wall on the goal line now has more time to react to the shot, the goalie can cover his side and the wall their side, everybody happy right? Wrong!

The reason it is not done because that would keep every player from the opposing team on side and allow them to freely roam in the box before the shot.

They would then be able to screen the goalie, deflect the shot and just cause havoc in the box prior and during the shot. Not only are their more opponents bodies in the box, their will also be players defending them so that makes close to 20 players in the box at one time. This would be causing sheer confusion for the defending keeper and team.

Why are some Free Kicks in the Box? Shouldn't This be a Penalty Shot?

Sometimes a referee will give an indirect free kick inside of the box for fouls that were not direct scoring chances or other situations such as a pass back or goalie catching, dropping and catching the ball again.

The attacking team is awarded possession of the ball from the place the foul was committed and the ball must be touched twice before it goes in. This can be off of a deflection, save or a teammate passing the ball to one another.

Do They Always Need to Be Strikes on Net?

Of course not. Although more often than not if a set piece is in and around the penalty box, direct strikes on net have the highest likely hood of being goals.

That doesn’t mean that it’s a must, remember there are no absolutes in soccer. If a ball served into the box to an oncoming player is better then a strike on net in your opinion than go for it.

Things to Remember about a Direct Free Kick:

-Build a set routine and go through it every time before hitting a set piece, both in training and in the game.

-Choose your spot, and go with it.

Now you know everything you need to know about free kicks at the highest level. All that’s left is to go to the workshop and start crafting your own masterpiece.