ever dreamed of scoring from a Corner Kick? time to Get the Big Boys Up! 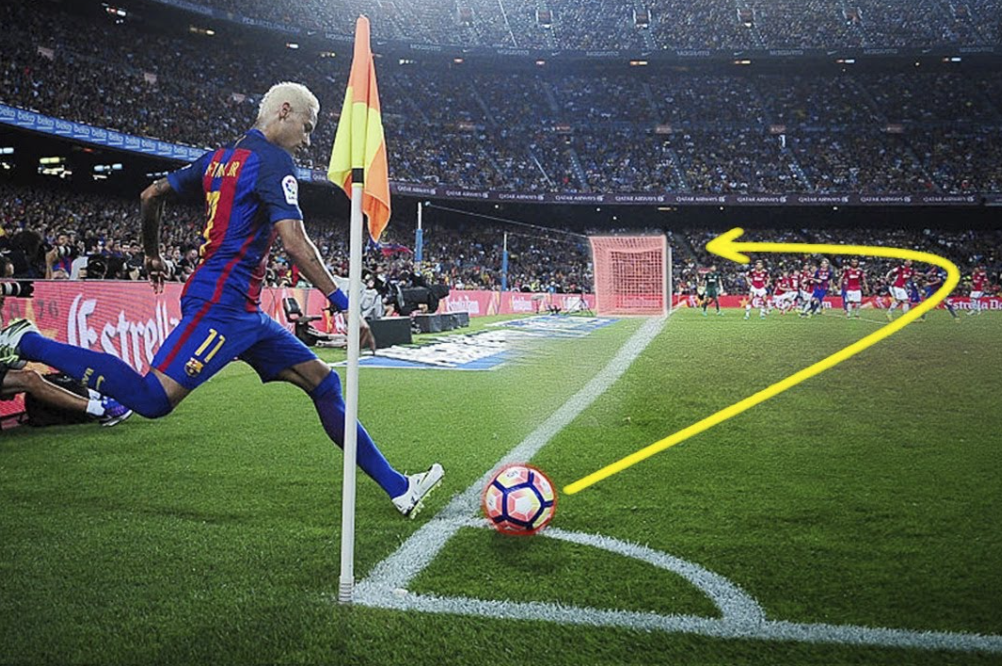 A Corner Kick can be a teams most dangerous weapon. For two reasons, firstly if you have a player that can serve a great ball into the danger areas of the opponents box creating havoc. Also if you have tall imposing players on your side that can get up and meet the ball in the air.

Service is everything here, just like in volleyball there is no spike without a great set. Driving a ball in with pace and timed runs can make this set piece more than a handful for the defence to handle.

A Corner is given when the defending team plays the ball across their own end line out of bounds. The ball is then placed in the corner of the pitch where it is then served into the box for players to attack it. Trick corners and short corners also can be used here but the most widely used corner is point A (the corner) to point B (the box). Now get Vidic and Rio up there to put your side on the score sheet.

top 5 things to remember when taking a corner kick

1. Do Your Job - Your team has rehearsed who runs where and where the ball needs to be served so just because you feel or see something doesn't mean you should steer away from the plan. Do your job and serve it where it's supposed to go and let the coach make the adjustments to the corner kick if necessary.

2. Quickly Now! - The moment before you think your team is set up look to serve it quickly to catch the other team off guard. The most common reason goals are scored from corner kicks are because the defence hasn't organized themselves. Look to play a quick corner kick should they be sloppy with their communication and organization.

3. Judge the Weather - Rain, wind or blinding sun? Consider all of these when taking the corner kick. If it's rainy you may need to hit the ball a little harder to get it where you want to. The rain can make the ball heavier, make it harder to travel through the air and make the surface where you're hitting it from more challenging. Wind is the absolute worst so you may need to add some power if the wind is coming at you or take a little off if the wind is at your back. Judge the weather and watch how the ball has been moving all game long and adjust accordingly. Lastly the sun, it's blinding the goalie or your teammates you may want to hit towards goal a little more to make it that much more difficult on the keeper to deal with it.

4. Short or Long? - Corner kicks can be effective by the traditional service in the box or by playing a shorter pass to a closer teammate. The short corner has some advantages like possibly having a 2v1 situation if the defending team only has one defender by the ball as well as being able to get a closer and more accurate cross or shot towards goal. If the defence is sleeping and you can show short to the ball and play it quickly before going to goal it can cause some real havoc for the defensive team.

5. Make the Keeper Work - You and your team have worked hard to earn a corner kick don't go wasting it now. Hitting it out of bounds or floating it up for the keeper takes all the pressure off the defending team so take your time, focus and hit the ball sweetly to your target and into the area of danger.

top 5 things to avoid when taking a corner kick

1. Doing Your Own Thing - Although you want to be able to adjust to all situations that may present themselves during a corner kick the most important thing to remember is to stick tot he plan. Whatever your team has practiced and your coach wants you to do make sure you are a team player and execute what the team is expecting. Don't try and play it short when your team play is long and visa versa, keep it simple and do what your team is expecting.

2. Playing Short When It's Not On - If you have freedom to do as you like and then show 3 players to your 2 on a short corner then look elsewhere. Don't force a short corner just because you think short corners are best, read the situation and adapt.

3. Non-Dominant Foot - Unless you are incredibly competent in both feet I would only lean on my dominant foot for hitting a corner no matter which side you are taking it from. It's better to have the power and accuracy from your dominant foot than the unpredictability of your weaker foot even if it means eliminating the angle of which the ball arrives in the box.

4. Making It Too Easy for the Keeper - Make the keeper work to hand this corner kick. Don't make it easy for them and shank it too low or out of bounds. Whip one in nice and close to them where they need to make a courageous decision to deal with it.

5. Clearing the First Defender - There is nothing worse then lining up for a corner kick and the kick taker hits it towards the box and first defender who is closest to the kicker easily clears it up the field out of danger. Aim a little higher and further then you need and whatever you do get it over the head of that first defender.

top 5 things to remember when defending a corner kick

1. See and Feel Your Man - Stop ball watching and get tight your player, at all times be able to either feel them with your hand or see them with your eyes and both if you can.

2. Listen to the Goalie - "keeper!!!" that means get out of the damn way. No matter the instructions from your keeper be sure to listen to them and follow their every command.

3. Aware of 2nd Balls - One of the most dangerous parts of a corner is after the initial ball has been cleared and a second ball is being crossed in. This causes confusion for the defenders and they tend to switch off and lose their men (especially in behind them on their blind side). Stay locked in and don't lose your man until the ball is cleared past half or out of bounds.

4. No Nonsense - This is not the time for cute dribbles, megs or clever passes. This is the time to drive through the ball with you foot and clear it whenever you get the chance. Clear your lines first then worry about playing football second.

5. Challenge Everything - Even if you don't think you can win the header and you see the man you're marking go up for it, go with them. Never give anyone a free header, just by jumping with them may throw them off, blind their view or the ball may deflect off of you out of danger.

how do you score directly from a corner kick? what is it called?

Scoring directly from a corner kick takes incredible technical skill, awareness and confidence to pull off. If you do so it is referred to as an Olimpiya. We have all seen them on TV and maybe a couple times in a game you've played in so we know how rare and difficult they really are to pull off. It's great to have in arsenal should you see an opening you want to take.

Here are a few things to consider when trying an Olimpiya:

1) Put enough curve on it so from the angle you are on it can nicely go into the goal.

2) Have a look for where the goalkeeper is. If they are off their line or busy organizing their team or yelling at the ref see if you can sneak one in.

3) Deception is key here, make it look like you are taking your time and hitting a regular corner kick then when you see your moment go for it!

If you want a deeper analysis of the effectiveness of corner kicks at the highest level feel free to read this article on The Value of A Corner Kick in Soccer.

What's the most important thing for a successful corner kick?

Service. Service. SERVICE!! The single most important thing for an effective scoring opportunity off of a corner is the service. No matter how tall your players are or how great they are at finishing, without quality distribution from this set piece it all means nothing. If it's a looping ball, driven, on the ground or bending in or away from the keeper is up to you but the quality must be there or you'll get nothing but a counter and a laugh from it.

do pro teams use short corners and do they actually work?

In case you can't read a short corner is when you play a short pass to a teammate right next to you and take it from there. You can play an overlap, give and go or even serve it from a better angle. Professional sides do frequently use short corners allowing to penetrate a defence down the line, serve from a closer angle or even take a strike on goal if the pass leading up to it is just right. They do tend to work (depends what your definition of work is) and allow the team to get into a more dangerous serving and overall scoring opportunity. I don't know about lots of goals but it is most definitely an attacking threat that no opposing team takes likely. Teams that may lack technical ability or the ability to create their own goal from the run of play can use this and other set pieces to compensate for their lack of offence.

Can you score directly from a corner kick?

According to rule, of course. I've had teammates who have scored directly off of a corner without touching anybody and going straight in. You'll obviously need to put a bend on the ball for it to go in and you'll need some luck or a keeper that's out of his mind but absolutely it has and can be done. You may need some luck too but to be great at anything in soccer you need a little good fortune.

who should line up to head the ball? attackers or defenders?

All depends really on who your teams best headers of the ball are. It's not necessarily position specific who goes and who stays. Generally the best head ball winners on any team or the centre backs (the reason they play the position) so they generally like to go forward and challenge for the ball.

Final Things to Remember about taking a Corner Kick:

-Service is everything, make sure you hit the ball from this set piece with power

-Don't get in too early if your attacking the ball, time your run and know the best time to meet the ball

-Keep the ball away from the keeper, the best way to do this is to hit it with pace between the pk spot and top of the six yard box making it difficult for the keeper to reach it

-Trust your teammates runs and do your job.