can you Pull Off A Bicycle Kick Like A Pro?

A Bicycle Kick is a test of skill, athleticism and courage. The courage not to look like a fool if you miss it. No risk no reward right? So just to clarify, if you're vertical happens to be measured in paper sheets, then stay away from this skill. Now if you got some hops in those shoes then by all means, the pitch is your dance floor.

A "bike" as it's commonly referred to or "a scissor kick" (which is slightly different) can be pulled off from all types of angles and positions. But generally it's pulled off when the ball is in the air, above your head and you attempt to kick it inverting your body. Making contact with the ball and landing on your side or back after thrusting your body's momentum upward.

Sounds tricky doesn't it, for you seasoned acrobats I just made it sound a lot more complicated than it actually is, maybe some video will clear it up for you.

top 5 things to remember when hitting a bicycle kick

1. Timing is Everything - The most difficult part about pulling off a bicycle kick is not the contact, technique or even athleticism necessary but getting the timing just right. Be sure to try and get your body turned in position before jumping to take one thing off of the list before trying to get your foot to connect with the ball. Practice with a friend on a matt or trampoline to brace your fall and see if you can start to judge how the ball comes towards you while getting your foot to hit it.

2. Right Distance - Unless your name is Zlatan stick to trying to pull off bicycle kicks from 15 yards and closer. You can try it from further than that but you might be better off just bring the ball down and keeping possession for your team.

3. Laces - Get ready to make contact with the ball with the top of your foot where the laces of your boots are. Nine times out of ten this what part of the foot you will be hitting a bicycle with. Whether the ball is coming from the side or straight above your head making connection with your laces will give you the best contact and power you need to beat the keeper.

4. Brace Yourself For The Fall - Trying to pull off a a bike can twist your body in unnatural ways and the landing can be just as unnatural. Try not to land directly on your back but aim to let your forearm or closed fist brace yourself as you hit the ground. It goes without say but avoid landing on your neck and head no matter what.

5. Guide it or Swing Through - Depending on how the ball is coming your way you need to decide whether you need a big wind up in the air or just making solid contact and guiding it in. If the ball is slowly bouncing near you head height or if you flick it up to yourself off your knee for example you are going to need to put some considerable power behind it. If the ball is coming in from a cross and there is enough power on the ball coming your way then all you may need to do is lock your lock and let it hit your laces as you guide it in the direction you want. Consider both when the opportunity presents itself.

If you're looking for the a deeper look at the physics of a bicycle kick feel free to read this article about what it takes from your body and mind.

top 5 things to avoid when hitting a bicycle kick

1. Giving It Away - The element of surprise is important here so if you can't do it quickly you probably shouldn't be attempting it all. If a keeper can read you are trying a bike because you are taking your sweet time setting it up and attempting it they will have time to get set and deal with it with relative ease. See the window of opportunity and strike as fast as you can.

2. Not Necessary - There's nothing worse then when a striker has a chance to make the simple play like lay it off or shoot with his foot or head and they try a bike and make a mess out of it. Pick and choose the right and necessary time to try a bicycle kick, if it's not on then just make the right soccer play until it is on.

3. Kicking Someone Else - Most bikes are attempted when the ball is at about head height so it's only normal and natural for an opposing defender to try and head the ball should it be in their range. If you see an opponent is clearly getting to the ball first ease up on trying the bike because you might end up with a yellow or worse.

5. Bad Pitch - Be careful of where you land and where you step as you start and finish a bike. Planting awkwardly off the jump or the landing can result in a nasty injury. Before the game check around the 18 yard boxes for any divots, uneven ground or holes that may cause you some issues. 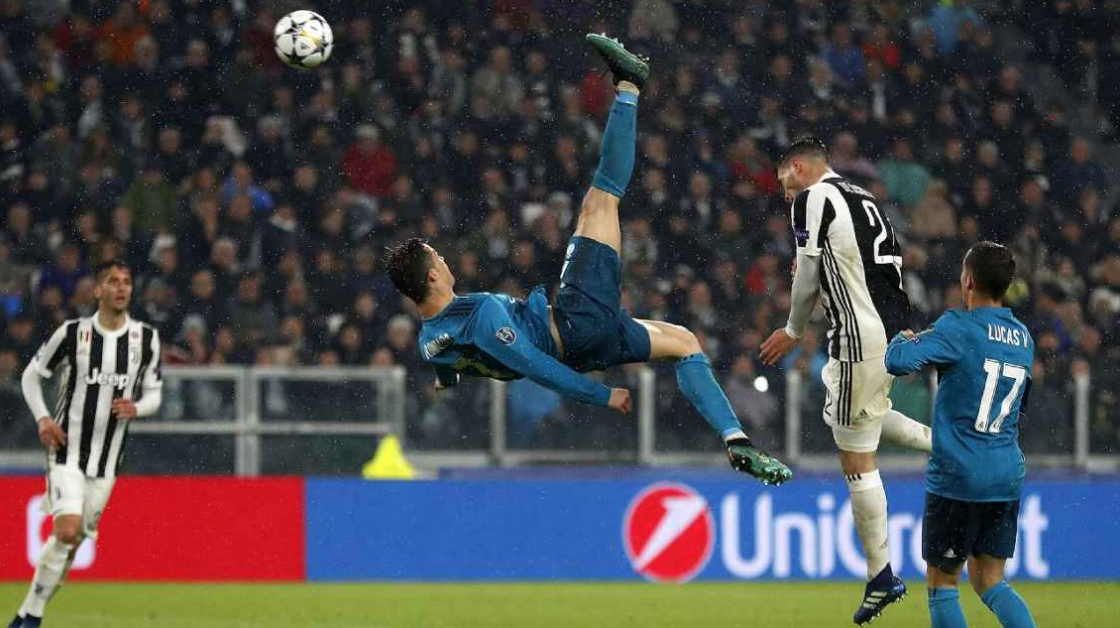 can i be called for a foul when doing a bicycle kick?

Believe it or not yes you can. It's only normal for a defender to be close to you when attempting a bike and depending on their position you could really hurt them never mind just fouling them. The most common fouls from an attacker who is attempting a bicycle kick comes from when the ball is about head height and the defender runs forward to hit it with their head at the same time the bike is happening and your foot hits their head. So who is to blame here? Well... it's a tough call for the referee to judge whether your foot was high and late or if the defender was late and hit your foot with their body or head. If you make contact with the ball first you should be okay but typically referees air on the side of caution and call a foul against the attacker. Moral of the story is know where the defender is, try and shield them off and keep them between you and the ball and make contact with the ball first and you should be in good shape.

how often do pro's try a bicycle kick? is it hard to do?

Believe it or not you might see more bikes in the defensive end during a match than on the offensive end. Sayyy what? Ya that’s right if you ever watch athletic defenders at the pro level then you’ll see some of their clearances using a bicycle kick. Not very often to be fair. Although the skill set and athleticism is higher at the professional level it’s not as common as you might think. A bicycle is not only dependent on the ability to execute one but on the situation and the ability to set one up and recognize when to hit it.

Is it hard to pull off? Compared to what? Building a house? In that case I would say it’s easy, but in soccer terms a bike can be difficult to pull off and it takes plenty of practice.

Like any technical skill in the game it takes hours of repetition and courage not only to try a bike but to get a quality strike in.

can you use a bicycle kick as a defender?

Have you ever watched Sergio Ramos play? If you have then you already know the answer to this question is yes! Bicycle kicks although only commonly talked about when it leads to a goal can also be effective during other phases of play in the game. Although it may look unnecessary at times especially when not going for goal a bike can be affective in situations where all other options seem to be shut.

Here are a few common situations you may use a bicycle kick other than shooting on goal:

1) Clearing a Through Ball Played In Over Your Head

2) A Cross In Attack That Is Time Sensitive

4) Keeping the Ball In Play

how often should i be practicing it?

If I'm being honest not so often that it's taking away from developing other parts of your game. This is a once in a season type attempt and sticking to working on the basic fundamentals should obviously take priority over this. Now if you have some extra time messing around at home or with some friends in the park no issues but don't get so consumed with something that isn't going to present itself often (if ever) in a match.

Some easy ways to train for bicycle kick is using a trampoline at home while a friend throws a ball your way or landing on a mattress or even a gym mat. Start trying to pull it off standing with one of the mentioned soft landing surfaces then eventually move into trying one on the move. Remember not all bicycle kicks need a huge wind up to generate the power, some balls are being served in a vicious pace and all you need to do is make good contact with a firm pointed foot.

Do you hit a bicycle Kick from a pass or do you set it up yourself? is there more than one type?

You can really do either. Majority of times you see a bike attempted in a game it will be from a cross or chip pass from a teammate. Other times it can be a clearance or broken play but most rarely is if a ball is played into you and you flick it up with any part of your body and set it up yourself. That takes more than a touch of class.

Is There More Than One Type?

Bicycles like passes or shots come in different shapes, styles and forms. A lot of it depending on the service of the ball and the positioning of the player.

Sometimes the ball come straight down, other times horizontally across all the while your body is adjusting to it. When it happens so fast you have little time to react and you may find yourself hitting the ball in a position you’re not use to in the air.

A Few More things to Remember about Bikes:

-The timing has to be just right so be patient

-Brace yourself for impact, sometimes your back or side might crash hard on the pitch

-If you pull it off, consider retiring as you seizure/celebrate with your teammates

-No risk no reward, if you see the opportunity go for it, no turning back mid air.


Please don’t spend too much of your time on the training pitch practicing bikes. It’s like a basketball player practicing full court shots all day. Much like bikes they are rare and there are other parts of your game that need a lot more work then the once in a blue moon bicycle kick.