Beach Soccer anyone? To the Sand We Go! 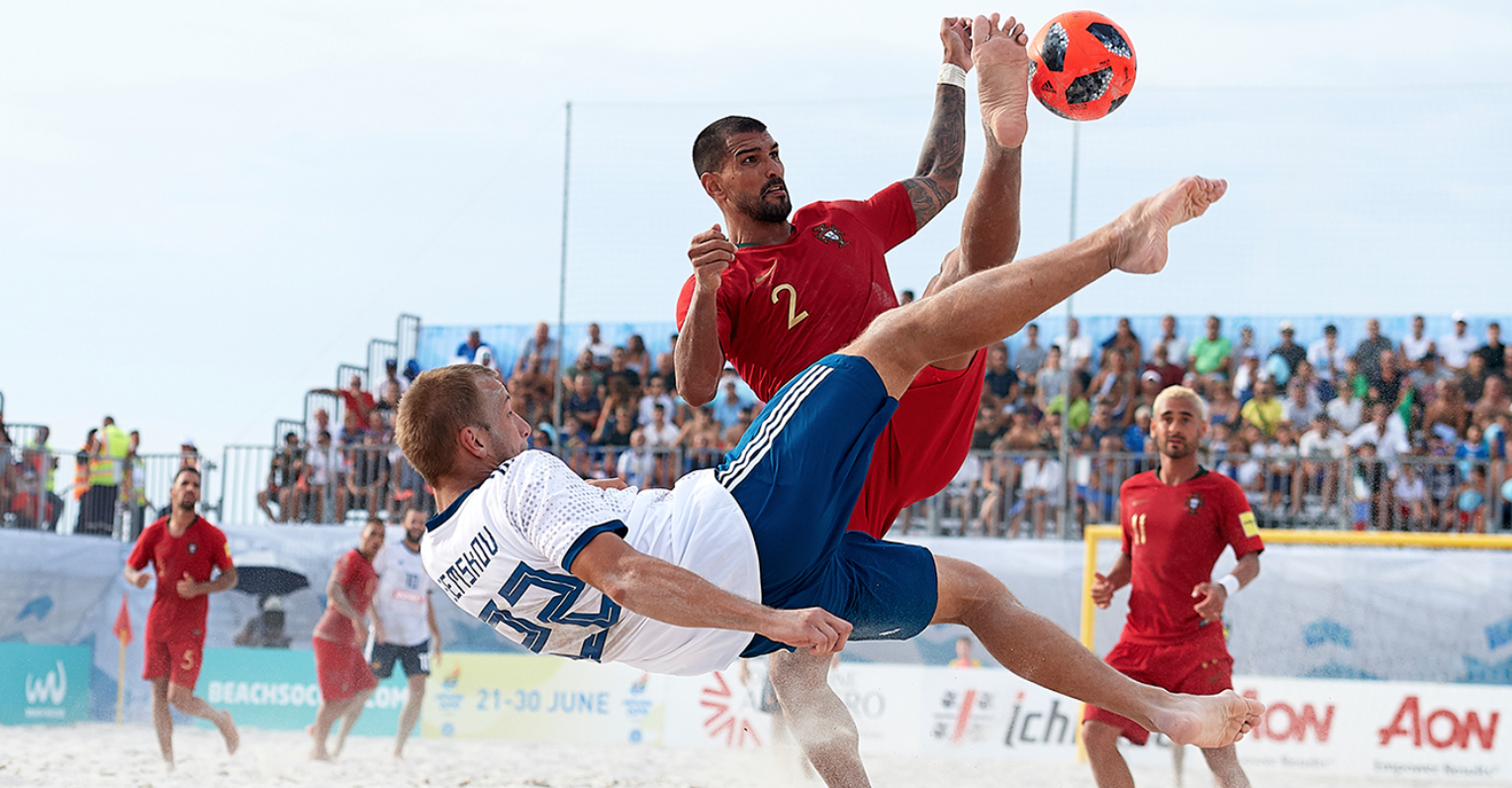 Aaaaah beautiful beach soccer, I can feel the sun bronzing my skin as we speak. Many people don’t know much about the sport and that’s okay because not all countries have the weather to make the sport thrive.

The sport much like 11v11 soccer is played with a ball and two goals, same old same old. The only difference with beach soccer is it’s 4v4 plus a goalie, games are shorter and there’s one more thing I know I’m missing something... what is it again? Oh ya it’s played barefoot on SAND!!

Beautiful beach soccer makes for exciting acrobatic goals and players and keepers throwing themselves around trying bikes and scissors all over the place leaving those less death defying players in the dust (or sand). If you've ever played indoor soccer then you are more than half way there to understanding beach soccer and what it's all about.

There are some important differences not only in game play but in the rules as well.

Looking for some inspiration? Look at these incredible goals from some of the best matches on sand. Don't just admire but watch the technique, body positioning and awareness to make some these goals impossible to forget.

If you're looking for some science behind all these beautiful goals I think you'll be surprised to hear that most goals are scored from set pieces in beach soccer. If you're interested then feel free to read the full article here:  An Exploration of Goal Scoring Strategies In An Elite Beach Soccer Tournament.

1. Throw or Kick-In - If the ball goes out just like in regular soccer the ball goes to the team that it didn't touch last. No change there but the way you inbound the ball in beach soccer is slightly different. You can choose to throw it in over your head like regular soccer or kick it in from the ground. This is a unique difference that you need to be aware of to use to your advantage when in attack and be on high alert of if defending.

2. Free Kicks - If awarded a free kick you will have a clear shot to goal if you want. No walls, no players in front of the ball and no other non-sense going on just you and the keeper. It's kind of like a penalty shot just you hit it from where the foul occurred which can be anywhere on the pitch. If you are a great free kick taker you play a massive role on a beach team, so if you're not the greatest beach player work on your free kicks and you'll always find a spot on the team.

3. Use the Keeper - This is probably the biggest advantage you can gain in beach soccer if you use it right, the keeper. The reason is the goalie can not only use their hands like usual but they can also pick the ball up if passed to them from their own teammate. This serves a couple purposes such as being able to throw the ball to any part of the pitch using their hands and it also relieves pressure in possession should the opponents be high pressing you. It is very common to see teams play to their own keeper then get up the field to hold it up for another teammate or go straight for goal. Don't be stubborn thinking you can dribble everyone on the sand and use your keeper wisely.

4. Easy on the Fouls - Because of the free kick is such a dangerous play in beach soccer you need to be careful in committing foolish fouls and allowing the other team to have easy scoring chances. A free kick is like a penalty shot in beach soccer because the opponent can't stand in front of it like they can in outdoor with a wall. Everyone must clear out of the way and allow the player to shoot directly on goal, so if you're going to foul make sure it is somewhere as far away from the goal as possible to give your keeper a better chance of stopping it.

5. Unlimited Substitutions - Unlike outdoor soccer at the highest level in beach soccer there is no limit on the amount of substitutions you can make. Now you can't make subs on the fly like in indoor but you can come and go as much or as little as you need throughout the course of a game. If you're a player or a coach it's good to know that if you're fatigued or want a certain match up during the game you can freely make substitutions as your heart desires. Similar to outdoor you will go to the center line and wait for the official to allow you to sub, you may also be required to hold up a substitution paddle with the number of the person you are replacing.

Well now after reading the previous few paragraphs you tell me. Okay in case you skipped that part the top 5 qualities of a great beach player are:

1. Extremely gifted technically - Beach soccer is a game of ball mastery, quality first touch and body control. The more sound you are with receiving a ball out of the air and the bumpy sand the more you will excel in this environment, point for the futsal players!

2. Ability to play in tight areas - Because of how much the ball dies in the sand and the limited overall space, there is constant pressure from players on the court. Your ability to hold off and escape these types of tight situations are essential to being a great beach player.

3. Athletic - Have a look at a beach soccer highlight video and you will see acrobatic bicycle kicks, diving headers, scissor kicks and aerial duels. Being able to jump out of the gym and move is a massive advantage on the sand courts.

4. Creative in the final third of the field - Let's be honest, no matter if it's indoor, outdoor, futsal or beach this game is all about goals. Creativity in the attacking third especially in beach is the core of every great beach soccer team. Whether it's bicycle kicks, scissor or incredible one time volleys your ability to make things happen out of nothing in the final third separates good from great. 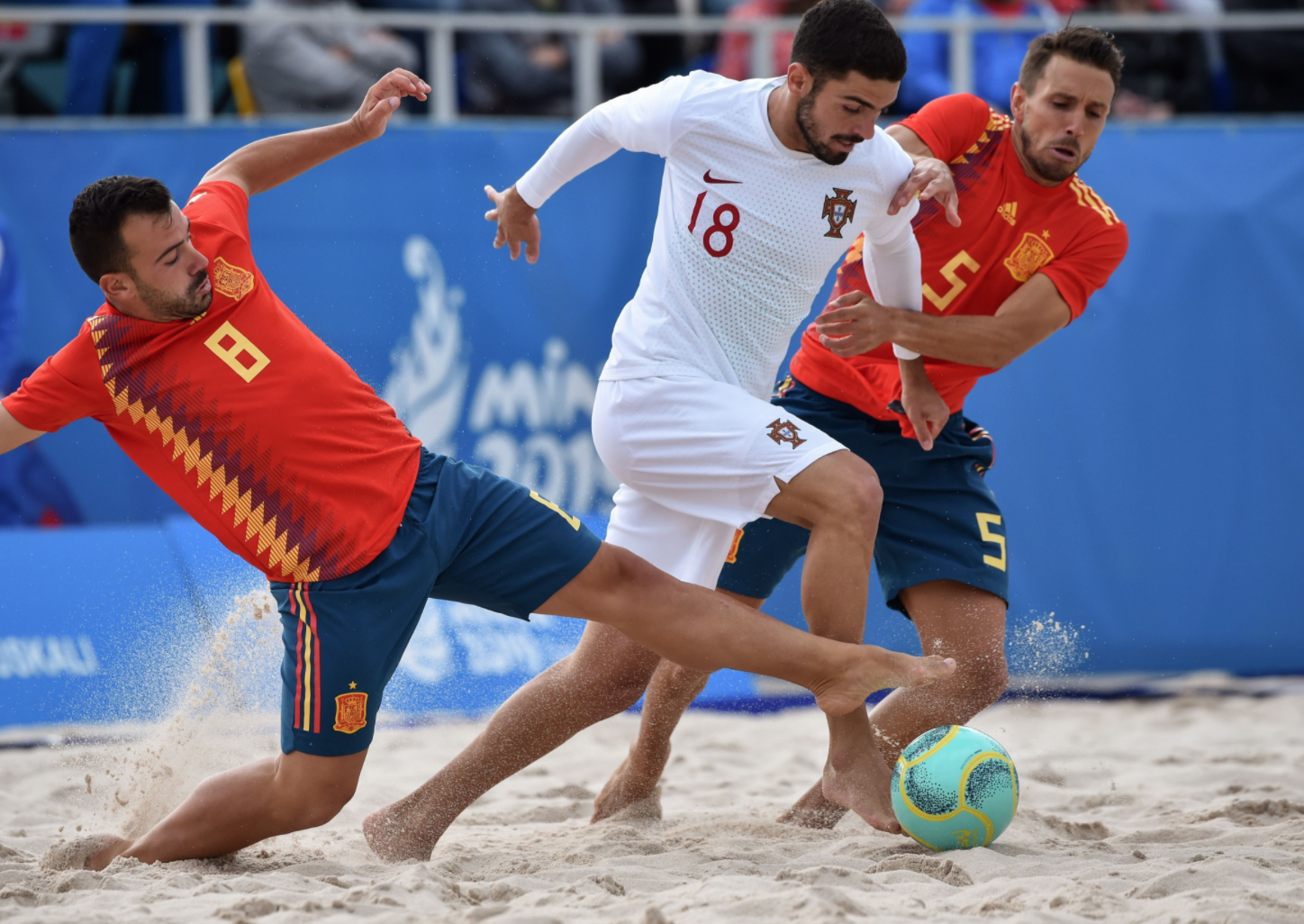 Depends what you consider popular, in relation to the outdoor game we all know then no it fails in comparison but if you consider how far it’s come, then ya it’s getting there, especially in recent time.

Beach soccer has grown in popularity especially in the past five years so seeing leagues in Europe developed and national teams competing in major competitions worldwide.

Obviously it’s not as easy to play as grabbing a ball and jumping on a patch of grass with some pals but its popularity on the world scene is growing and growing. Don’t be surprised if one day your kids are asking you to play soccer in the sand (hey one less pair of cleats to buy).

Is It Similar To 11v11 Outdoor Soccer?

Welll… ya knowwww…… kkindaaaa sortaaaa. Not really to be fair. It’s only normal for it to resemble the game from which it stemmed and yes it is more similar to 11v11 soccer then basketball let’s say but there are some obvious differences.

Not only the fact that’s it’s played in sand, with less players and smaller goals there are other differences that can go unnoticed. The style of play obviously is quite different then your regular outdoor game. It’s run and gun on the beach with less passing and more direct and more risk taking involved all game long.

How Will Playing Beach Soccer Help My Outdoor Game?

If you play beach on the fries (the side) then there are certain aspects of it that will help your out door game such as:

In beach, balls come at high speeds from all different areas of the pitch with little room for error so your first touch to control a ball will be tested more often. This happened when only three players are on a team allowing for more touches on and tests of that first touch.

Comfort With the Ball in Awkward Tight Spaces

Playing with your back to the goal, being doubled and having to serve a ball while it’s waist high are examples of different awkward situations that come up. Learning to deal with different situations and escaping them is an important lesson to be learned that translates to outdoor as well.

One Time Strikes on Goal

The game on sand requires quick strikes on goal end to end meaning you have a split second to have a go at goal. These small windows of opportunity to shoot develop great habits of hitting a ball first time.

How Will Playing Beach Soccer Hurt My Outdoor Game?

Although soccer on the beach has it’s pluses in terms of raising your technical ability it also can be counterproductive in a couple ways if you’re not careful and intentional in the way you play. Some things that may hurt your game may be things such as:

Playing simple, passing and moving and taking players on at speed are staples of the modern outdoor game. Beach sometimes develops poor habits doing just the opposite of these, trying to dribble too much, staying stationary and putting your foot on the ball.

Although it does provide a certain level of fitness in a slightly different manner you can’t compare beach fitness to full field 90minute fitness outdoors. If you’re thinking playing on the beach is going to develop your conditioning for outdoor then you have some issues you need resolving.

Another thing that may hurt you transitioning from sand to grass would be positional awareness and soccer understanding. Knowing when to step, when to drop and when to stay home can get lost in a 3v3 oriented game like beach is.

Have you ever seen a player amazing at outdoor soccer but just isn't the same indoors? Or an incredible indoor player that looks so out of place on an outdoor pitch? Well keepers are the same, some of their abilities are more suited for outdoors (big, tall, long and good at collecting aerial balls), or indoor keepers (quick reactions and good with their feet) and course for beach you also need specific qualities. The best beach soccer keepers have the following attributes:

3. Strong Distribution with Hands and Feet

5. Ability to Shoot on Goal!

Do A Lot of Pro’s Play Beach Soccer in the Off Season and After They Retire?

Very few players’ dreams are to play beach as a young boy/girl. Usually the dream is outdoor soccer and sometimes somewhere along the road an opportunity to play beach comes by and they grab it.

There It is the tall and skinny of beach soccer, in case you missed it take the sand out of your eyes and take a second look, you never know maybe one day you’ll playing the sandbox with all the other children.