the 4-5-1 soccer formation, We'll Just sit back and Wait for PK's Thank You very much 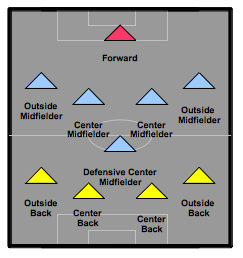 What can we say about the 4-5-1 soccer formation? Something like, offence sells tickets and defence wins championships. A solid formation centered around team defensive shape and unity can be a corner stone of a long term successful squad. If you know the importance of team chemistry, togetherness and hard nose D, then you'll love this set up.

Still thinking of lining up with this formation are you? Well there are some important things you need to know. Things like the overall impact the formation has on the defence, attack, transition and even set pieces. The beauty about every formation including this one is they can morph into different formations depending on where the ball is, the personnel you have and of course what you are trying to accomplish.

Detailed position specifics along with all the advantages and disadvantages about the formation all can be found here, just remember a formation is only as good as the pieces you put to play within it, let's hope you're the type of player that can fit into any formation.

video explanation of the 4-5-1 Soccer Formation

Basics of the 4-5-1 Soccer Formation

Set Up: The 4-5-1 soccer formation consists of 1 Goalie, 4 Defenders, 5 Midfielders and 1 Striker.

Strategy: Typically most teams that play a 4-5-1 formation play what is called low pressure (sitting deep in their own half) and look to play on the counter attack through the wing channels and the other spaces the opponent has left open.

When To Use It: First you need to decide whether you're a team that is going to play your way no matter what and have the opponent adjust to you like Barcelona does or are you going to look to change up what you do game to game based on the opponent. If you're not married to the 4-5-1 soccer formation but are willing to go to it should you need to here are the things to consider:

1. Is the opponent committing a lot of numbers forward? If so the 4-5-1 may be a great way to absorb the attack and hit them on the counter.

2. Is it late in the game and are you protecting a lead? If so think about switching to a low pressure 4-5-1 formation to see out the game.

3. Do you have a team with three strong center mids you want to get on the field or only one good striker? If so this formation will get your best players on the field and give you the best chance to win.

More commonly played these days as a 4-2-3-1 the same idea applies of having a high concentration of midfielders with 3 of them patrolling the center of the park at all times. If you're looking for other ways to set up your 4-5-1 soccer formation feel free to read this detailed article which outlines 3 Ways To Play in a 4-5-1.

WHAT ARE THE TOP 5 ADVANTAGES TO PLAYING A 4-5-1 SOCCER FORMATION? 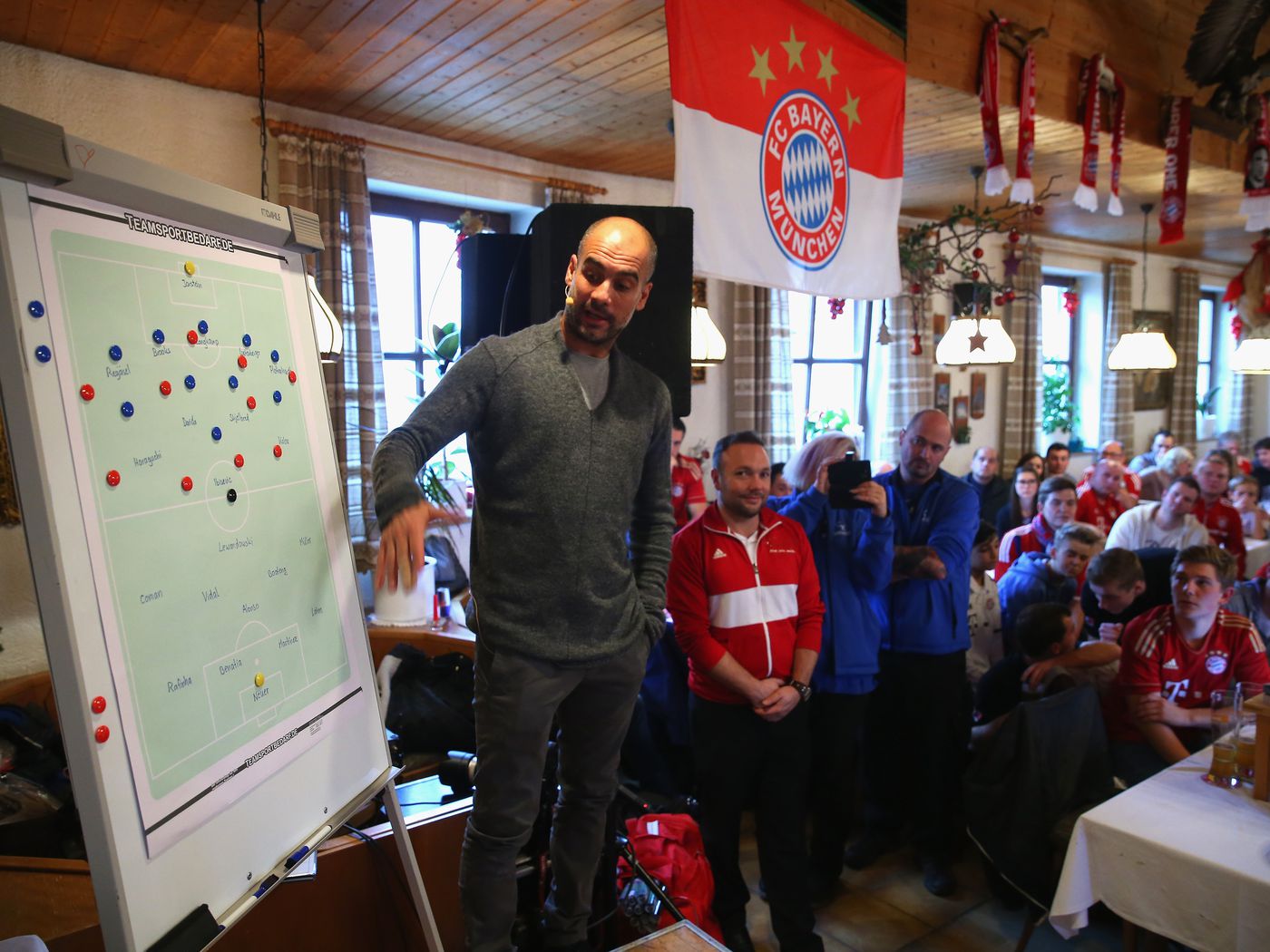 1. Strong Defensive Foundation - The heart of any championship teams is their defence and the 451 is just that. Two lines of 4 with 3 center midfielders allows you to outnumber any team in the middle of the park protecting the center of the pitch. If you use this formation while sitting low pressure in your own half then you will drive your opponents crazy as they try to break you down.

2. Transform to a 433 - There is some decent flexibility in a 4-5-1 if you were to push the wingers into the same line as the forward you have now taken on a 433 formation with a simple adjustment. You can have your team attack or even high press in a 433 until the opponent gets into your half then you can sit back into the 451 by dropping those wingers back down again. With one slight adjustment this defensive formation turns into a high powered pressing and attacking one.

3. Control the Middle of the Field - If you've ever played chess you know the importance of having control and dominance of the middle of the board. The 4-5-1 formation does the exact same thing but on the pitch, lots of numbers in the middle of the pitch with the three center midfielders. If you control the middle you'll always have protection defensively no matter how stretched you may get throughout the match.

4. Versatility in the CM - Having the ability to play with three center midfielders gives you the creative control to play all types of different combinations of players that can carry out whatever strategy or job you want. You can go with the traditional balance of one attacking, one defensive and one box to box center mid to be able to combat anything the opponent comes with. If the opponent is weak in attack you can go with 3 more attacking center mids or visa versa if the opponent is strong in attack. The versatility of mixing and matching the attributes of your center mids is a real plus in this formation.

5. Counter Attack Friendly - Most 451 formations sit deep in their own half drawing the attacking team in and leaving space in behind them to counter attack into. Because of the defensive center midfielder adding an extra layer of defence there is a good probability of winning balls and denying central penetration which can lead to counter attacking in wide areas the other way. Have your wingers ready to fly forward whenever you regain the ball.

WHAT ARE THE TOP 5 disADVANTAGES TO PLAYING A 4-5-1 SOCCER FORMATION?

1. Tough to Get Buy In From the Team - Yes there is nothing sexy about playing a 4-5-1 low pressure counter attacking style of football. Unless you start off with some decent results it is going to be tough to convince your team that this defence first formation is right for you and the team. Watch as your attacking players roll their eyes and feel uninspired by the set up but you have to go with your gut and you can't make everyone happy all the time.

2. Lack of Attacking Options - Having just one striker can limit the options a team has in attack and can quickly frustrate your teams striker as they run around with no prayer of retaining the ball. Having two center backs being able to take risks winning balls with the threat of only one striker can make life easy for them. Trying to combine with other players can also be a challenge considering the length a teammate may need to run to support the next ball.

3. Tough to High Press - This formation with just a single forward and wingers that traditionally play tighter to their fullbacks can be difficult to high press in and keep the compact shape the 4-5-1 soccer formation is known for. High pressing formations typically have an attacking center midfielder under the striker or a line of at least two strikers to give the backline hell as they try and keep possession.

4. Hard to Find the Posting Striker - Every good defensive shape needs a release pass to an attacking player to hold the ball up and give the team a bit of a break and an offensive platform to build off of. The 451 can lack the resources such as having only one striker to hold the play up while everyone else gets forward, with only one striker center backs can cheat and take more risks winning balls knowing they have nobody to go to if they do receive it.

5. Absorbing A Lot of Pressure - When you sit in a 4-5-1 in your own half you are asking for lots of balls being played into the box from central and wide areas along with any interior passing or shots from distance. This type of pressure is asking for a higher volume of clearances and one misstep or poor technique can lead to goal scoring chances. If this is a risk you are willing to take fine but understand this formation invites more action in your defensive third.

is this a conservative formation?

Depends how you look at it. Either you think defence wins championships or you don't. Although this 4-5-1 formation with only one visible attacking threat in the lone striker may come off as reserved, don't judge a book by it's cover.

Discipline behind the ball, clinical with it, this is the 4-5-1 soccer formation as we know it.

What's the hardes working position in this formation?

The easy answer is that every position has its difficulties and struggles which is true. But, we can not deny the strikers and the outside midfielders constant work. The striker is responsible for initiating the defensive pressure as well as dotting the "i" on any play forward. A lot to ask for from one person.

Defenders Positioning in a 4-5-1 Soccer Formation:

Midfielders Positioning in a 4-5-1 Soccer Formation:

Midfielders Responsibilities in a 4-5-1 Soccer Formation:

Strikers Positioning in a 4-5-1 Soccer Formation:

Strikers Responsibilities in a 4-5-1 Soccer Formation:

-High work rate for defensive pressure on the back line of the opponents, funnelling them in wider areas and forward not backward.

If you like what you heard the 4-5-1 may appeal to your style of play or coaching style. It is difficult to get players (especially offensive minded ones) to buy into this system. When players first hear 4-5-1 they automatically think defence defence defence.


Return from 4-5-1 to Soccer Formations Page